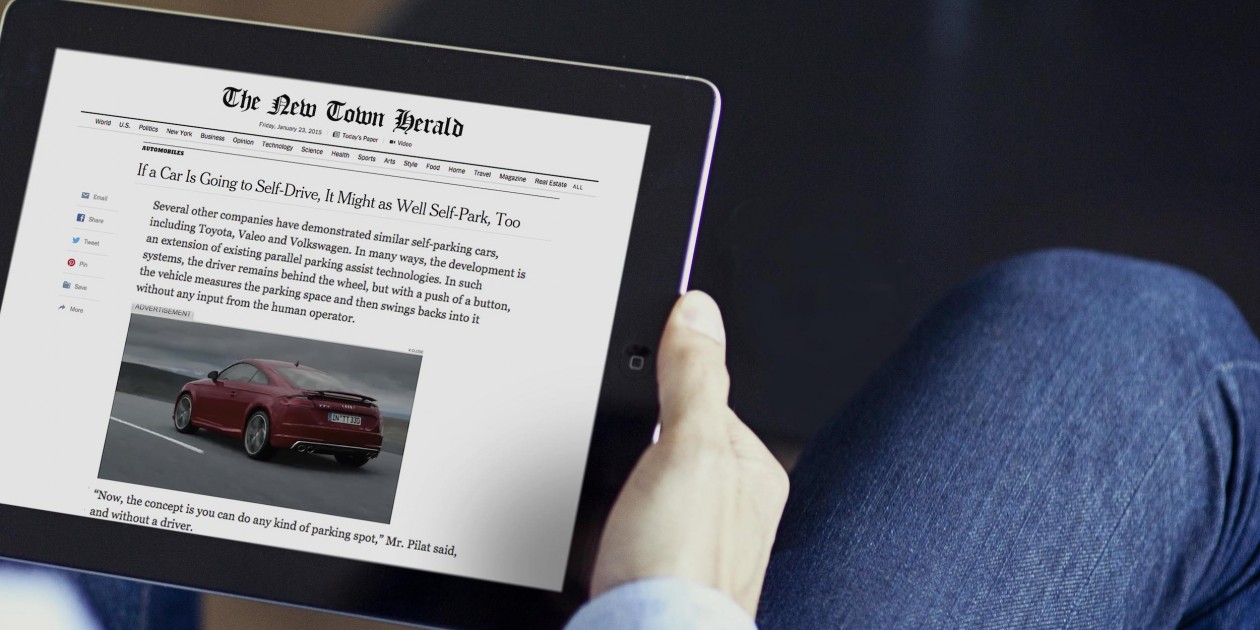 Slimcut’s Splitbox unit telescopes into view between text paragraphs. It autoplays an ad with its audio muted — similar to Facebook’s popular autoplay video ads. When the ad ends, Splitbox shrinks and disappears. Here’s a quick demo (scroll down to see the ad appear).

With offices in Toronto and Paris, the company has signed big-name Canadian publishers like Torstar, Postmedia, St. Joseph Media and TC Media, plus international publishers like IAC and Microsoft, to use the ad unit on their sites. Splitboxes are currently running on the Toronto Star, National Post and Canadian Living, to name a few.

Founder Damien Véran said said Slimcut’s not interested in replicating low-impact banner-based video ads. Rather, the idea is to create video inventory for text content that could match pre-roll in quality and exposure. At the same time, it’s important to avoid being intrusive, and maintain the integrity of the publisher’s editorial content.

“We wanted something that is equally beneficial for the advertiser and the audience,” he said.

That’s why Splitbox has a built-in frequency cap – no matter how many pages a visitor surfs on the site, they will only see one Splitbox per session. Users can also easily choose to skip the ad by scrolling past it. The video won’t register as a completion, since it pauses when it’s no longer 50% on-screen.

But even with that capability, Véran said publishers are registering full completion rates between 55-70%.

Splitbox is also helping publishers’ meet advertiser demand for viewable impressions. Since it isn’t loaded until the user scrolls over it, the ads are 100% viewable by design, just like responsively designed display ads.

Scaling up with new marketplace

Now with a healthy roster of top publishers on board, Slimcut has moved on to stage two — launching Upscale, an automated video ad marketplace dedicated to selling Splitbox video. Upscale will sell select impressions on an upfront, guaranteed basis to participating buyers, who can target based on publisher and 3rd-party data.

Toronto programmatic demand-side platform Acuity Ads is the first buyer to have access.

Véran said many of Slimcut’s publisher clients are still testing the marketplace platform, so he couldn’t disclose which of them are currently selling on it (though this information will be available to buyers). He stressed Upscale is focused on premium inventory only, and said several well-known Canadian publishers are participating.

Premium publishers have been reluctant to adopt automated buying platforms for fear it will drive down their prices, since large-scale automated buying is perceived as being lower quality. Although several private marketplaces like the Canadian Premium Audience Exchange and Juice Mobile’s Nectar have had success aggregating premium Canadian supply, there are few high-volume repositories of large-format, locally-sourced video inventory — which is among publishers’ most valuable ad space.

“Premium inventory mixed with not-so-premium inventory means the advertiser is not willing to pay premium CPMs, because they don’t know where it’s going to go,” Véran said. “We only work with top premium publishers, so why not gather that inventory, give advertisers what they want — premium audience — and give the publishers what they want — premium revenue, without competing with their own direct sales.”

One concession Slimcut made to get publishers involved in Upscale is that buyers will not be able to purchase impressions from specific publishers on the platform, only audiences and categories like “automotive” or “lifestyle.” After the buy, they’ll be informed which of their ads went to which properties.

Though it might cause some friction with advertisers, Véran said it was necessary to avoid cannibalizing publishers’ direct sales. He said if buyers are looking for specific sites and placements, rather than run-of-network, they can always buy Splitbox ads directly from the publishers at a slightly higher CPM — but if they are more interested in scale across premium sites, then Upscale is the way to go.

Véran co-founded Slimcut in 2011, initially focusing on custom paywall technology and later pivoting into ad tech. The company’s main headquarters and development team are in Paris, where Véran was born and raised, but much of its sales are done out of its Toronto office, where he and his family have lived for the past seven years. Slimcut recently opened a sales office in New York to expand into the U.S.