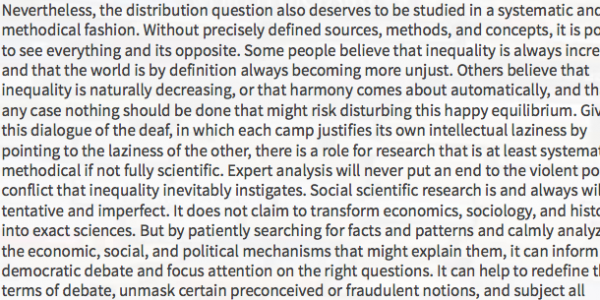 What the experts have to say about Jack Dorsey's radical proposal

Marketers everywhere felt a great disturbance in the Twittersphere last week. CEO Jack Dorsey confirmed the company is considering expanding its character limit from 140 up to a comparatively endless 10,000.

That likely won’t mean that tweets themselves become screeds that clog up visitors’ feeds. The way Dorsey described it, people will be able to attach longer blog entries to their Tweets, similar to Facebook notes or LinkedIn articles. Dorsey insists that “the majority of tweets will always be short and sweet and conversational!”

Today's task: Ask a person you know in real life if being able to write 10,000 characters instead of 140 will convince them to join twitter.

We rounded up what some of the experts had to say about why Twitter may make the move, even in the face of so much backlash.

Why it could work for marketers

Media pundit Matthew Ingram opined in Fortune that the change is a necessary step to getting Twitter’s audience growth back on track:

There is a crucial point at the root of all this sound and fury, and it’s not that Twitter simply doesn’t care about its core users. It’s that those users are no longer of much help to the company, unless they significantly increase their engagement, which seems unlikely at best. What Twitter needs is new users, and lots of them—and it needs them to spend longer on the network, interacting with tweets and (hopefully) Twitter ads. And so it is trying everything it can think of to make that happen.

By imposing the 140-character limit for most of Twitter’s nine-year existence, the service has pressured users to write succinctly, which created the quirky conversational culture that has come to define the social-media wire. But it also forced users away from the service when they wanted to pen or read a longer take… Housing more content, in theory, could keep people on its site and lure newbies who click on Twitter links within news stories or in Google’s search results. Once on Twitter, they may be served an ad and, if the company does it right, be enticed to sign up.

Online marketer Ken Wisnefski, writing for The Street, was also in favour:

The way things are on Twitter right now, everything moves so fast; factors like catching the right trends, using the right hashtag or just finding the right time to do a promotional tweet are so much more crucial. For that reason, Twitter hasn’t generated much return for advertisers (my clients)… If Twitter becomes a more detailed platform, while it’s a huge derivation, could create a better marketing platform and scale ad revenue.

No doubt, says Jonathan Long, CEO of Market Domination Media, longer tweets would be a better vehicle for branded content:

Logical thinking would suggest that content-rich tweets will perform very well in Google’s search results, giving brands another platform to use to attract organic website traffic… Users will also be more willing to click an “expand” option than an external link — it will be less disruptive, and you will still be able to work in a call-to-action within that 10,000 character long-form content.

But Graham Milne, writing for the Huffington Post, warned that would mean Twitter has become more about brands than users:

Upon deeper reflection, this move to 10,000 characters does feel sadly more and more like an accommodation to the demands of advertisers rather than an organic evolution of the platform based on its users’ needs and wishes (witness the many unheralded cries for an edit feature for tweets that have already been posted). And it’s only advertisers who will be able to exploit the 10,000 characters to their fullest potential… No one wants to dedicate so much time to composing something that will potentially fall out of sight a few minutes after it gets posted.

Vinay Menon at the Toronto Star called back to a famous example of a brand update gone wrong:

This will become New Coke versus Classic Coca Cola all over again. The new users, with no memory of the old governing law or filter, will not improve the experience. They will hasten its demise. They will turn the site into something else… By detonating a core feature — and aping Facebook or Tumblr — Twitter is only harming Twitter. It is telling the world, “We are open to radical change.” This is also telling existing users, “Sorry, you’re not good enough.”

Shira Ovide at Bloomberg News added that Facebook-style posts won’t fix Twitter’s core problem, which is that most people still don’t know what it’s for.

Embracing tweets of short-story length may not hurt Twitter if it’s an option most people never use. But it also won’t entice more people like my mother, who used to ask me all the time why Twitter is useful for her. She has given up on that question and on Twitter.