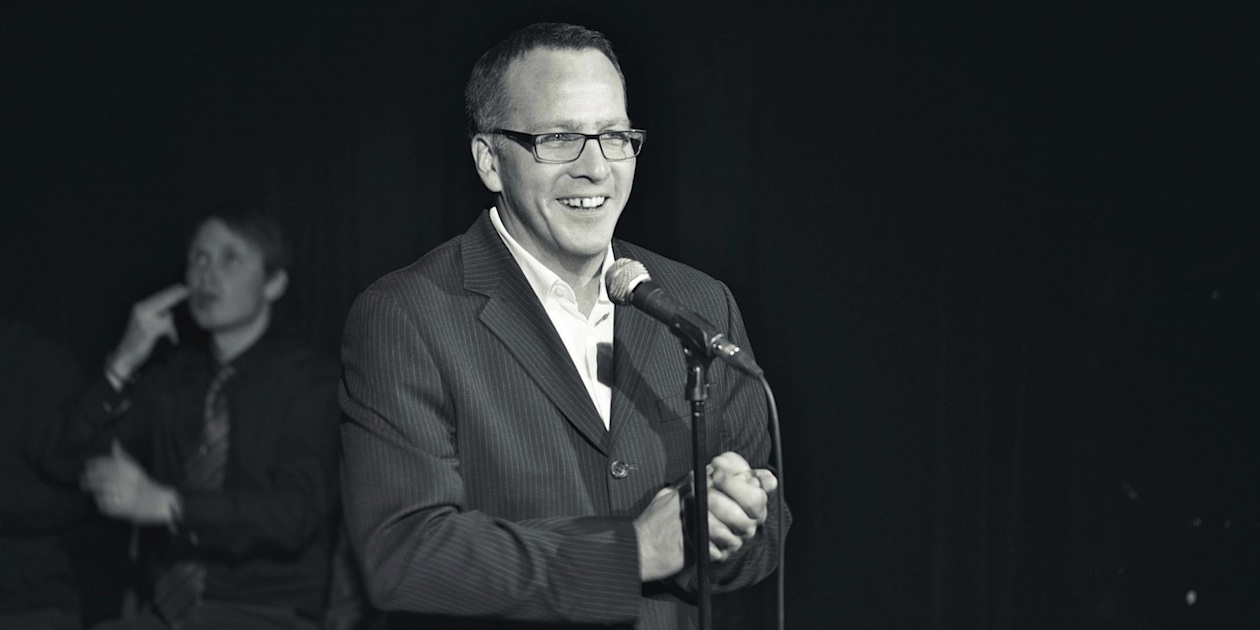 "Call me a keynote speaker. Call me a comedian. Call me an advertising guy."

As the lights go down at Toronto’s Social Capital Theatre, Ron Tite’s voice booms from the back of the room.

“Apologies if you’re on acid,” Tite jokes as the audience is blasted by a rainbow of bright lights from the disco ball spinning on the ceiling.

Tite is hosting Monkey Toast, the monthly improv series the agency founder also produces. The format is a bit like a late night show, set on the small stage – Tite interviews two guests (Donovan Bailey, David Suzuki and Ezra Levant have all taken the seat next to him), then a troupe of improv actors create a scene based on the interview.

Tite is known in ad circles as the CEO and founder of The Tite Group and a speaker, but he’s also deeply entrenched in Canada’s comedy scene. Since the late ’90s, Tite has been working the circuit in both worlds, touring as a comedian, then returning to work as a creative director.

He first tried his hand at standup back when he was an account director at Sharpe Blackmore. While most comedians hit up open mics to test five-minute sets, Tite took a more entrepreneurial approach — he produced and headlined his own 45-minute show, “Captain Crunch Flashback.”

He got the laughs he was after and soon he was getting booked around Toronto at comedy nights, which led to gigs on the road. As Tite built up his reputation as a comic, he faced a dilemma familiar to all moonlighters: was he Ron Tite the comedian, or Ron Tite the ad guy?

Tite’s always insisted he can be both. He pursues comedy as a passion, he says, but also takes it seriously. About three years ago, around the same time he started The Tite Group, he stopped taking corporate comedy gigs and started focusing exclusively on speaking engagements.

Audiences, he says, weren’t sure what to do with the business insights slipped between jokes, so he flipped the script and now offers jokes between the business insights. The strategy is working: Tite books about 60 speaking engagements a year, which is the main driver bringing new clients in The Tite Group’s door. His team, he says, doesn’t participate in RFPs – clients learn about him and the agency through his appearances.

Though he no longer takes corporate comedy jobs, Tite keeps a foot in that world with Monkey Toast. When the founder of the series, David Shore, moved to the U.K., Tite took over as executive producer and host and The Tite Group bought partial rights to the property.

At the Social Capital Theatre, he holds court as master of ceremonies, opening the show with a few minutes of standup like a late night host. Topics range from politics (Justin Trudeau is going to open a Brothel!) to the Blue Jays’ winning streak. He’s also a skilled interviewer: he’s well researched, asks follow up questions and isn’t afraid to drop embarrassing questions for the benefit of a laugh.

One of the guests on stage is a fellow ad guy: Publicis vice-president of strategic planning Max Valiquette. They talk a bit of shop (“Nothing helps Snapchat grow like moms getting on Facebook,” Valiquette quips), but mostly the conversation is about politics and current events. When they do talk about technology and social media, it’s an easy flow that’s accessible to the room of non-marketers.

For years, Tite feared being pigeonholed as a comedy marketer – someone brought in exclusively for business problems that could be tackled with humour. He’s no longer concerned about those external definitions.

“Call me what you want,” Tite says. “Call me a keynote speaker. Call me a comedian. Call me an advertising guy.”

“I’m a unique individual, with all these skills and experience and that now shapes a unique perspective that helps solve my clients’ problems.”