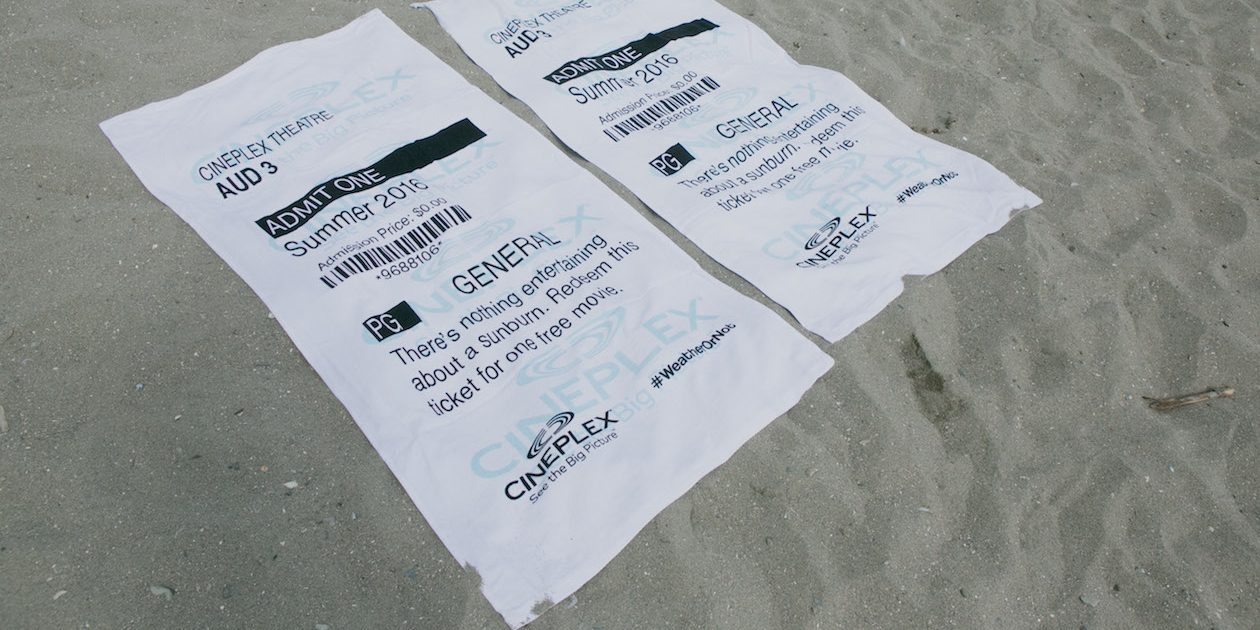 Cineplex wants to talk about the weather

Cineplex Entertainment has thrown in the towel in its efforts to attract more patrons.

The theatre chain has launched a marketing campaign positioning it as a reliable fall back option for when adverse weather interferes with Canadians’ summer plans.

Developed in association with Toronto agency Zulu Alpha Kilo, the “Weather or Not” campaign was built around a series of what the company called “surprise and delight” initiatives that underscored the suitability of a movie regardless of the weather.

“When we did research into our guests’ entertainment habits, it was something that kept coming up in the conversation,” said Cineplex’s vice-president of marketing Peter Furnish of the creative strategy. “When the weather is bad they don’t re-consider, or sometimes when it’s too hot they don’t know what to do.”

Pat Marshall, vice-president of communications and investor relations for Cineplex, said there was “absolutely” a correlation between movie attendance and extreme weather, with attendance spiking when it is both excessively hot and cold.

The first execution in the “Weather or Not” campaign saw the 162-theatre chain distribute more than 1,000 beach towels that were a replica of a Cineplex ticket at popular beaches and pools in Wasaga Beach, Ont., Montreal, Vancouver and Halifax. Each towel was redeemable for a free movie ticket (though patrons did get to keep the towel).

“We had people coming in who had sunburns and wanted to get out of the sun, and some people in Montreal [where the weather was cooler] who were happy to change their plans and come into the theatre,” said Furnish.

According to an Angus Reid survey commissioned by Cineplex as part of the PR outreach for the campaign, 42% of Canadians cancel their plans if a summer activity is impacted by the weather, with 30% indicating they don’t have a back-up plan.

Cineplex also filmed people’s reactions to create a video that is appearing on Cineplex’s various social channels. The media buy from Isobar will amplify the initiative across various digital channels, said Furnish.

Other planned executions in the “Weather or Not” campaign include a truck providing samples from Cineplex’s Yo Yo’s Yogurt Café, and an undisclosed initiative that Furnish promised would be “shocking” for Canadians. “It will be a lot of fun and certainly generate a lot of conversation,” he said.

The “Weather or Not” initiative is part of the “See the big picture” brand platform that Cineplex introduced last year, which is aimed at prompting Canadians to prioritize entertainment in their stressful everyday life.

“A lot of us are either not taking vacation or spend a lot of time on the highway, and it’s so easy to cut that piece out of your life,” said Furnish. He called the new initiative a “totally different take” on the brand platform that launched with the charming short Lily and the Snowman – which has racked up more than 9.5 million views on YouTube alone since its December debut. “It exceeded all of our expectations,” said Furnish. “It was the right message at the right time, delivered in the right way.

“People responded so well to the last message, so we’re hoping for a similar reaction,” he added. “It’s the next stage in the evolution of our brand.”

While the Lily and the Snowman film was targeted at a broad audience, Furnish said the “Weather or Not” campaign was aimed at millennial audiences, a group he called “pleasure pursuers.”

“It’s a time of the year when people are re-visiting their entertainment needs and kind of open to doing different things, so we’re trying to drive consideration among that group,” he said.