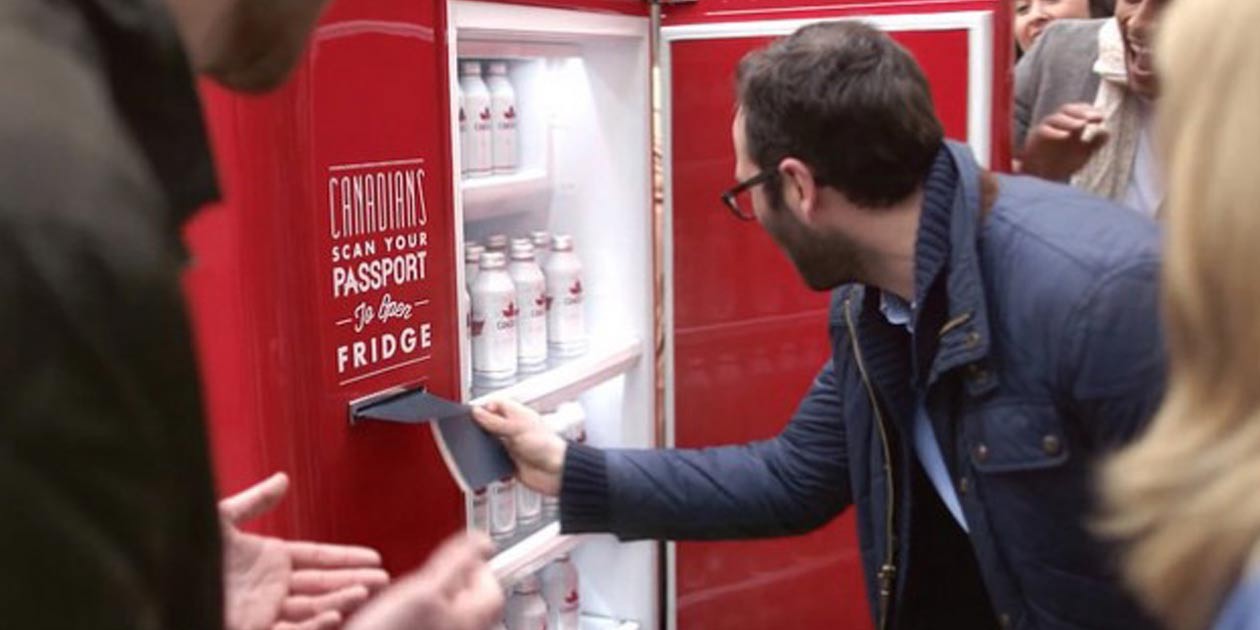 Rethink and Molson Coors should treat themselves to an oversized bottle of Molson Canadian. “Beer Fridge,” the branded traveling red appliance that stood in for Canadian-ness on the streets of Europe, on a tropical Indonesian beach and at the Sochi Winter Games, was judged by a jury of creative experts to be the best of the 2014 Marketing Awards.

The campaign, based on a series of experiential stunts that were filmed for TV and online ads, began life as a treat for Canadian travelers in Europe whose passports unlocked the fridge’s stock of beer. In addition to Best of Show, the work won a gold medal in the Out Of Home – Experiential/Stunts/Events category, and a silver in Film – Online Single.

“If only one bit of brilliance can get Best of Show honours, the choice was tough, but hardly controversial,” said jury co-chairs Nancy Vonk of Swim and Luc Du Sault of LG2, in a joint statement. “We see a lot of impressive stunts out there and it’s common we either have problems understanding the message or, worse, knowing who is talking to us. Here, we have a fridge full of beers which cannot say anything else than ‘beer.’ And a Canadian passport that says ‘Canadian.’ It’s a no brainer.”

Rethink was among the top overall trophy winners, earning 10 medals including another Out Of Home gold for Bulk Cat Litter Warehouse’s “Catnip Direct Mailer,” four silvers and four bronzes.

However, Montreal’s LG2 and its affiliated lg2boutique brought home the most medals on Thursday with 25 awards.

The Montreal agency earned five golds: one for Canac’s “Ceramic” in the Film – Television Single: 30 Seconds and Under category; two for Festival de magie de Québec’s “Magic Powers” (in the the Out of Home Digital Single and Out-of-Home Transit/Posters Single categories); and two more for the Société de l’assurance automobile du Québec (“Get Them Used To Waiting For Your Answers” won in Public Service Film Campaign and “Miss” won in Public Service Radio Single).

Jury member Peter Ignazi, senior vice-president and executive creative director at BBDO Toronto, called the Canac spot “one of my favourite ads in the show. Anyone who’s bought an older house has been there. It’s true and hilariously breakthrough and memorable.”

Rounding out LG2/lg2boutique’s haul were an additional nine silver and 11 bronze awards.

Paired, the affiliates garnered another four silvers and five bronzes.

Both the Ministry of Health and Long-Term Care and Wrigley Canada benefitted from strong work from BBDO Canada this year, which was honoured by the jury with five gold trophies. The Ministry’s “Social Smoking” film campaign and its component “Social Farter” spot earned three golds between them in Public Service’s Integrated, Film Single and Film Campaign categories.

“How often do you see a fart joke that’s this smart?” asked Linda Dawe, jury member and senior copywriter at Taxi Canada. “Brilliant piece of work in a category where the knee-jerk instinct is to be deadly serious. [It was a] gold to me at first glance.”

The agency’s work on Wrigley’s “Pyramid Scheme the Rainbow” campaign for Skittles found the top of the podium twice in the Digital group of categories – once in the Online Campaign category, and again in the Best Use of Social Media competition. In total, BBDO earned 12 awards, including six silvers and one bronze.

In what turned out to be a night of many gold trophy presentations, two more agencies racked up medal counts of 10. Zulu Alpha Kilo garnered one gold, three silvers and six bronzes; and Grey Canada found itself with seven golds and three bronzes. “The insight and idea at the centre of this campaign stopped me in my tracks,” Shane Ogilvie, Zulu Alpha Kilo’s executive creative director, told Marketing. “So smart. Then the simple, yet impactful, executions brought it all together in that perfect ‘how the f*** does this even happen in our modern world’ kind of way. I love this work.”

All medal-winning work is profiled in The 2014 Marketing Awards book, available now in print and in an enhanced iPad version early next week. The evening gala, held in Toronto’s swanky Carlu ballroom, also saw Bill Moir, Tim Horton’s retiring chief brand and marketing officer, accepting the Association of Canadian Advertisers‘ Gold Medal award. First presented in 1941, the ACA presents the award to an individual who has made an outstanding contribution to the advancement of marketing communications in Canada.

“I am delighted to be recognized by the ACA with this prestigious award,” Moir said in a release after learning of the award. “I am honoured to have led the marketing direction of one of Canada’s most beloved brands, and I could not be more proud of the incredible work that my team has done.”