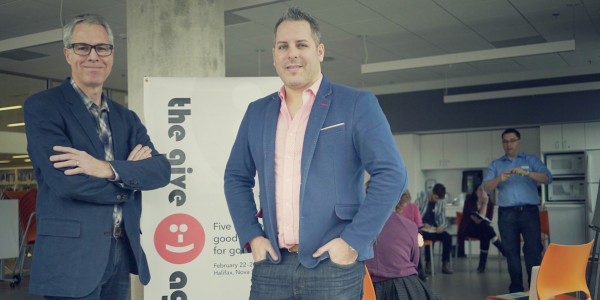 Marketing and communications professionals in Halifax have launched a “pop-up agency” to help out local not-for profits.

The Give Agency, the brainchild of Brian Hickling and Mike Maloney, is providing free services over five days (Feb. 22-26) to organizations including Feed Nova Scotia, Habitat for Humanity and Brideway Academy.

“Non-profits are so busy just trying to keep the lights on that often they don’t have the opportunity to step back and take an entire day and consider strategy, infuse new ideas and really get out of their comfort zone,” said Maloney, a PR and media relations strategist.

“The level of talent that we’ve been able to attract has been absolutely incredible… so it’s kind of an opportunity that they can’t really refuse because they could never afford to [hire them] otherwise.”

About 30 branding and advertising experts are donating their time, along with students from local universities. “We have people who have Ivy League MBAs, and award-winning people in digital, social media, communications,” said Maloney. “So to put those people in the room, we’re looking at upwards of $20,000 a day worth of talent.”

The pop-agency is housed in the new Halifax Public Library. During six-hour sessions, groups of eight to 12 people hear about the non-profit’s challenges, and narrow it down to one problem that they can solve that day. The group then splits off into groups of four to come up with ideas, which are eventually narrowed down from 30 to three that are presented to the client.

The idea for The Give Agency was born last November when Maloney and Hickling met for a beer. Discussing the great creative talent in Halifax, Hickling and Maloney wondered how they could harness that talent and work together.

“We said, ‘what about an agency that did good things for people?’” said Hickling, a former creative director at Extreme Group who now works as freelance creative and strategic consultant. “Obviously I can sell a lot of things for a lot of corporations, but what about doing something where we can give back to the community?’”

The Give Agency hopes to expand the concept across the country and to cities around the world, and has already received requests to replicate the model.

This year’s pop-up agency is sponsored by NABS, which provided some funds to get the idea off the ground. “It dovetails so nicely with what NABS does: we are there to help and support people from the industry across the country,” Louise Bérubé, director of allocations & services at NABS. “It’s a great opportunity for Nova Scotia to highlight their [advertising] community, and how people have volunteered their time for this special project.”