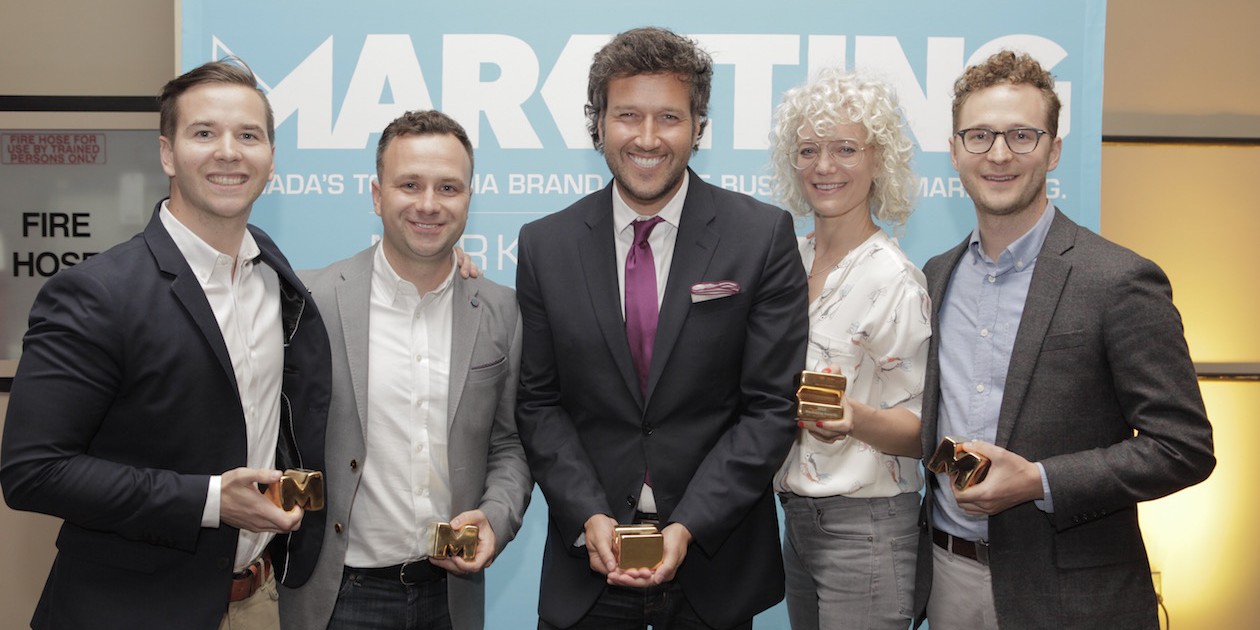 Plus, a look at the 19 other agencies that took home gold hardware during the gala

In building an ice rink atop a mountain for client Molson Canadian, agency Rethink rose to new heights in 2016. Its ascent continued at the Marketing Awards Gala in Toronto Thursday evening, as the agency took home honours as the most awarded creative shop at this year’s show.

Rethink was awarded five Gold M trophies, in addition to seven silver and 10 bronze awards. In 2015, Marketing implemented a new, Olympic-style system of ranking agencies, assigning five points to a gold win, three to a silver and one to a bronze. With 56 points, Rethink topped the leaderboard with award-winning work for nine different clients.

One of the agency’s big wins was again for Molson Canadian, a client Rethink won Best of Show with in 2014 for its “Global Beer Fridge.” The latest campaign featuring the beer fridge was “Hockey Heaven,” which saw the construction of the aforementioned hockey rink on top of a mountain — possibly the most Canadian thing an advertising agency has done for a client in recent memory. Hockey Heaven was a fully integrated campaign including broadcast, digital and social media.

Rethink also won gold for a radio campaign featuring a quirky voiceover artist and fun scientific facts called “Now You Know,” which was created for Vancouver’s Science World. The agency’s fifth Gold M of the evening was shared with American agency Wongdoody, for an online public service video called “#TheReal10,” which used the news of the U.S. Treasury’s plan to print a woman on the American $10 bill to draw attention to the wage gap between men and women.

Another notable moment of the evening was when MacLaren McCann and its multicultural marketing team, Cultura, were awarded gold for a television spot for Coca-Cola celebrating the Hindu festival Diwali. (Correction: In the awards book, Marketing incorrectly stated this was the first gold to be awarded in the Multicultural category since it was introduced in 2011. We regret the error.)

NO BEST OF SHOW?

Thursday evening’s gala ended with the surprise announcement that no Best of Show prize would be awarded at the 2016 Marketing Awards. Best of Show traditionally recognizes a piece of groundbreaking, gold-winning (and non-public service) work the jury feels compelled to recognize. Best of Show is meant to signify a piece that rose above its peers in the Canadian advertising industry in its entry year, and deserves extra recognition for its insights and execution (for a look at previous winners, see our story on the Best of Show for 2015, Leo Burnett’s “#LikeAGirl,” and this retrospective on past Best of Show winners).

2016 Marketing Awards co-chairs Helen Pak and Dom Caruso addressed the audience on Thursday evening with a speech that echoed the sentiment of their co-chair letter in the 2016 awards book.

In their letter, Pak and Caruso noted that the 2016 Marketing Awards “produced a wonderfully diverse array of great work from across the country and agencies big and small… What it didn’t produce is a Best of Show.”

During deliberations, the jury felt while the 2016 entries included a number of impressive, original and well-executed pieces of work, one couldn’t be singled out as a groundbreaking entry that rose to the top above all the others. In fact, mulling over the Best of Show decision resulted in an hour of silence, until it was suggested by one jury member that perhaps a Best of Show didn’t need to be awarded in 2016.

“Things got lively again when we talked about what Best of Show represents,” Pak and Caruso noted in their letter. “We all believed that it needed to be more than a math exercise. It had to recognize work that was universally admired across the judging panel as the best of the best, work that demonstrated a level of creativity and executional excellence that would be inspiring to any judge in any show in the world.”

Pak and Caruso said the decision did not reflect a lack of talent or accomplishment among the gold-winning work this year. They did note, though, that Best of Show winners such as “#LikeAGirl” have set a new bar for the daring type of work that a jury is now looking for in a Best of Show winner.

“Just as sometimes a Grand Prix isn’t awarded in Cannes, this year the judges believed that it was right to not award a Best of Show at the Marketing Awards,” said Pak and Caruso. “Awarding for the sake of awarding would have been the wrong decision. ”

To hear more from the jury on this decision, you can watch the video played during the Best of Show presentation at the 2016 Marketing Awards gala.

In addition to three gold wins, Grey took home a special jury prize for its work for Moms Demand Action for Gun Sense in America. The jury decided to award the campaign “Groceries Not Guns,” which targets American grocery chain Kroger for its open-carry firearm policy in retail stores, with a Marketing For Good trophy. Last awarded in 2014 —  also to Grey and Moms Demand Action — Marketing For Good is generally viewed as a Best of Show prize for public service and pro bono work. Grey also won gold for separate aspects of “Groceries Not Guns” in 2015, but a stunt called “The Big Question” took the campaign to new heights in 2016. Using a projector, the agency and their client literally posted a “big question” onto Kroger’s corporate head office building at night, asking why the building was the only Kroger location that didn’t allow guns to be carried inside.

Below, you’ll find a complete list of the 2016 Marketing Awards gold winning agencies. Each bullet point represents a separate gold M that was awarded at our gala, and beneath an agency’s gold medal count you’ll also find their 2016 points tally. As noted earlier, we award five points for a gold trophy, three for a silver award and one point for a bronze. For a complete list of the 2016 Marketing Award-winning agencies, click here.