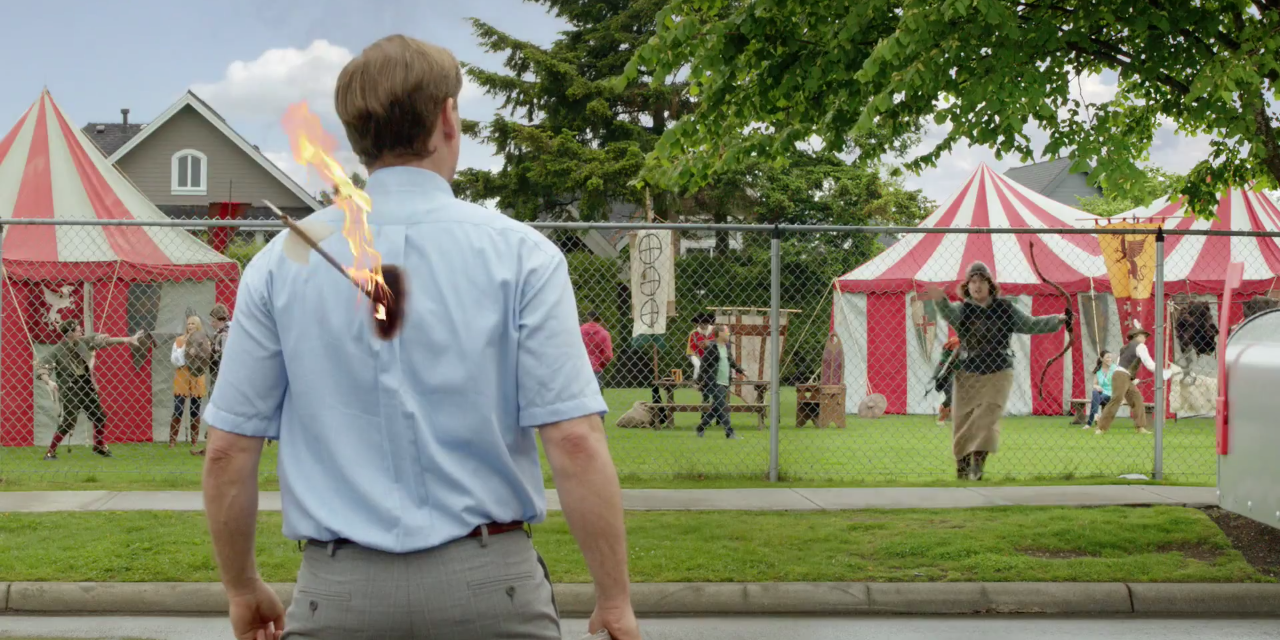 Known for its “Now you know” series of TV ads that humorously depict scientific facts, Vancouver’s Science World gathered some fascinating insight of its own into Canada’s advertising clearance world with its latest work.

The not-for-profit organization claims that its “Positively Painful” ad was deemed too violent for TV because of images depicting a man being kicked in the groin, shot in the back by a flaming arrow and getting hit by a bus.

The 30-second spot from Rethink shows the man enduring a series of painful events, which also include being hit in the head by a tossed newspaper and stepping on a nail, with continued good humour. The super then reveals that “Optimists feel less pain” followed by the Science World logo.

Morgan Tierney, a copywriter on the campaign, says the script was originally submitted to the Television Bureau of Canada’s (TVB) Telecaster services division, which clears all commercials airing on Canadian TV, about two months ago.

“They came back with a list of things we would have to change if we wanted to get the spot on the air,” said Tierney. “It was going to compromise the spot if we moved forward with it, but luckily we live in an age where we have an alternate channel, the internet.”

The spot is a continuation of Science World’s decade-long campaign to bring science facts to life in an interesting fashion. It is currently featured on the organization’s YouTube channel, and is also expected to air in cinemas.

“We’re surprised the fun, slapstick script was not approved by Canadian censors,” said Suan Teo, director of marketing for Science World, in a release. “From our experience, using comedy and an element of the unexpected is a great way to make science facts stick – and that’s what we’re all about.”

Telecaster did not respond to Marketing’s interview request, but in its guidelines regarding violence in commercials, the organization states that commercials that “sanction, glamorize or promote violence” may not be accepted, while those depicting violent scenes deemed unsuitable for children may be aired after 9 p.m. or 11 p.m.

“If violent scenes encompass the entire commercial, the commercial may be rejected,” the Telecaster guidelines state. However, the guidelines also state that “certain allowances” will be granted for spots that employ comedic violence, depending on the context.

Rethink says that another commercial promoting Science World’s temporary exhibit “Science of Sports,” entitled “Apparitions,” was restricted to post-11 p.m. airings because it includes the word “nips.” The spot features a marathon runner experiencing a series of hallucinations, including a cheerleader and his parents, as he approaches the finish line.

“Apparitions” was conceived around the same time as “Positively Painful,” but the original script for the spot also had to be amended because it contained the word “nipples.”

“We didn’t know that was a word you can’t say on TV, so we comprised and changed it to ‘nips,’” said Tierney.

“Our goal is to put out the best, most entertaining creative we can conceive of, and to do that sometimes it means we end up negotiating or run into roadblocks. We’re lucky to live in a world where we have this amazing medium, the internet, which is really the Wild West all over again.”

Rethink also created a series of print ads for the exhibit, one of which features the grim reaper standing on a golf green and holding a flag, accompanied by the message “More people die playing golf than any other sport.”