Like so many retail outlets at this time of year, the Untitled & Co. store at 438 Queen St. W. in Toronto has installed a colourful Christmas window designed to attract the attention of pedestrians in one of the city’s trendiest shopping districts.

At first glance, the window appears to offer yet another idyllic take on Christmas: A brightly coloured tree, a mantel festooned with cards, a mannequin family gathered around a table with a golden-brown turkey at the centre.

It’s all very Norman Rockwell-esque – until the husband suddenly delivers a backhand slap to his wife that causes her head to snap back, and the little boy covers his eyes as the scene of domestic violence plays out in front of him.

FCB Toronto devised the project for the Ontario Association of Interval & Transition Houses (OAITH), a provincial coalition of women’s shelters founded in 1977, and one of its member shelters, the Yellow Brick House.

Titled “The Window Project,” the initiative debuted on Dec. 6 (coinciding with the National Day of Remembrance and Action on Violence Against Women) and runs through Sunday. 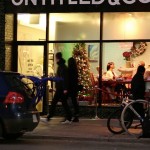 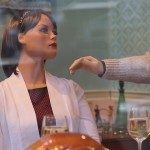 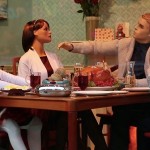 Charlene Catchpole, chair of the OAITH board of directors, said the display underscores the fact domestic violence tends to spike during the holidays, as abusers react to the added stress and financial pressure. OAITH sees a roughly 30% increase in women needing access to shelters between mid-December and mid-January, she said.

“The message we really wanted to deliver is that this isn’t a magical time for everybody,” said Catchpole. “But more importantly, we want to let women know they’re not alone at this time of year, and there are people here who can offer support when and if they need it.”

Jeff Hilts, vice-president creative director at FCB Toronto, said the initiative draws its power from the juxtaposition of a popular holiday scene with the reality of domestic abuse. “A lot of those windows [feature the phrase] ‘Happy holidays,’ but unfortunately for so many women and children, their holidays aren’t happy,” he said. “If nothing else we wanted to raise awareness of this issue.

“We deliberately wanted it to be mannequins and automated, but staying true to the movements of window displays and the moving parts in those displays,” he added.

Nancy Crimi-Lamanna, VP creative director at FCB, said the display is timed to coincide with the annual 16 Days of Activism Against Gender-Based Violence Campaign, which runs through Dec. 10 and is now in its 24th year.

The display also features some sinister “easter eggs” that aren’t readily apparent: There are 14 roses in a vase commemorating the female victims of the 1989 mass shooting at Montreal’s École Polytechnique, while the bottle of wine is intended to subtly underscore the increase in incidences of domestic violence when alcohol is involved.

The display presents some sobering statistics about domestic violence, and invites people watching the scene to text “No More” to donate $5 and stop the scene for 60 seconds (a TV set in the display thanks people for their donation and features a countdown clock before the scene plays out again).

“Often times you donate to a cause and you don’t actually get to see the effect of that donation, and in this instance you can see the result of what that can mean to a family – which is getting women out of violent situations and to safe shelter,” said Crimi-Lamanna. “I think that’s the most powerful part of the piece.”

The use of children in the display underscores another key element of domestic abuse situations. According to a UNICEF study, more than 362,000 children in Canada witness or experience family violence each year.