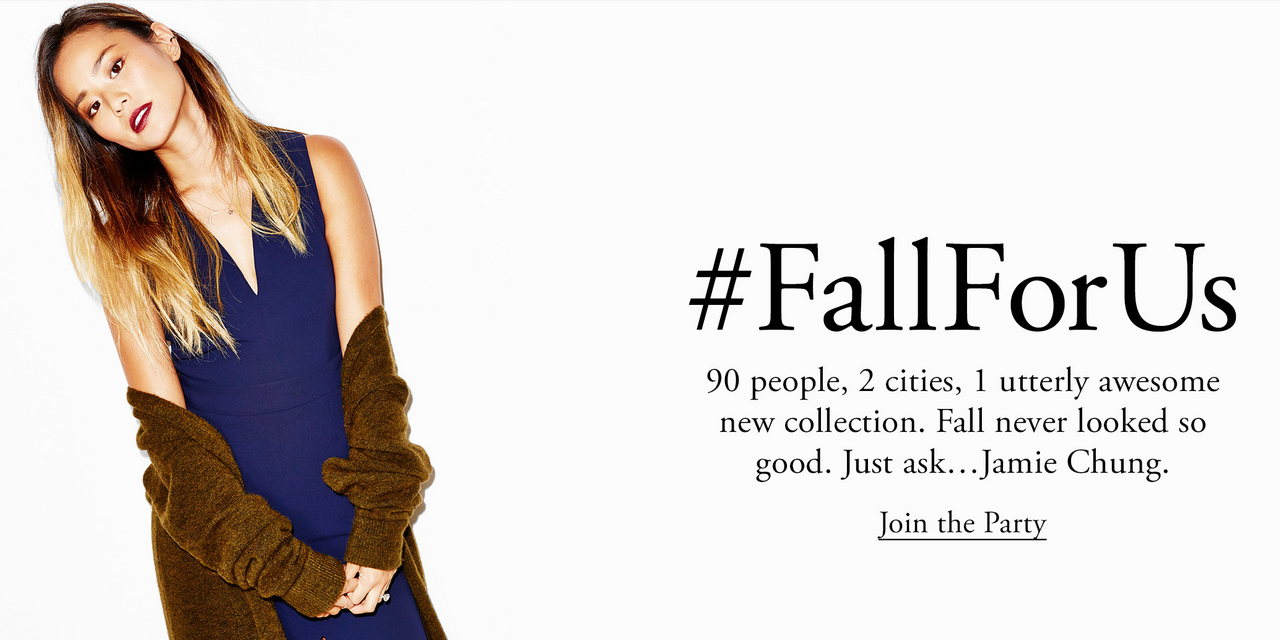 Aritzia has enlisted some familiar faces to participate in a social media campaign that playfully showcases its fall collection.

Actresses Jamie Chung, Anna Camp, Greta Lee, singer Tinashe and blogger Chriselle Lim are among the females featured in the #FallForUs campaign that launched Wednesday on Instagram, Twitter, on the retailer’s website and online magazine. The women were all photographed wearing an item from the fall collection that they have “fallen for.”

When coming up with ideas for the fall campaign, Oliver Walsh, chief marketing officer at Aritzia, told Marketing that Instagram was a particularly good fit because it’s a tool that so many of its consumers use for style inspiration.

From there, the Aritzia team decided on a list of female influencers to highlight in the campaign. Walsh said they were looking for up and coming female talent across arts, culture and entertainment, which is a huge area of focus and commitment for the retailer. Each year since 2005, the Vancouver-based retailer has featured the work of an up-and-coming photographer on its bags as part of an initiative called “Artistic Licence.” The photographer’s work is also showcased online and in the retailer’s magazine.

As “friends” of the brand, the women featured in the new campaign weren’t compensated for appearing in the campaign. Walsh, who started with the Canadian clothing boutique in November 2013, said he believes this to be the largest social media-based campaign that Aritzia has undertaken. But it’s not about the platform, he said. It’s about understanding consumer behaviour.

“It’s about understanding the customer and what she’s doing at that time and what we think is exciting about the product and thinking about ways in which we can use all of our channels to tell the important stories about our product and our brand,” he said.