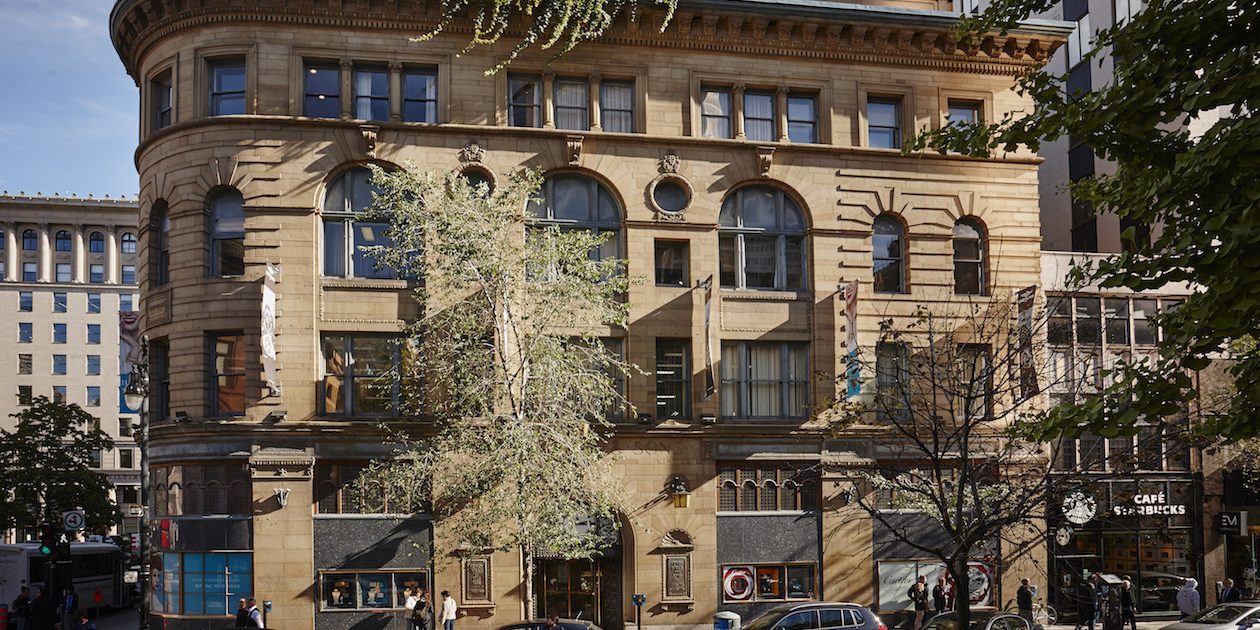 Birks building renovation to include hotel and bistro Iconic Canadian jewelry brand Birks will soon have a Montreal hotel bearing its name—though Birks is not getting into the hotel business.

The hotel will be developed in the Birks building on Rue Sainte Catherine at Phillips Square. The location is the home of Henry Birks’ second store since 1894 and current head office for the company, but the building was sold by Birks in 2000 and the company has been renting space as a tenant since then.

The Birks branding on the high-end boutique hotel and bistro is the result of an agreement between Birks and Jean Salette, owner of Le St-Martin Hotels, who is working with Birks for the redevelopment.

“He didn’t have to do that. He could have built a hotel without involving us,” said Eva Hartling, vice-president, marketing and communications for Birks Group. “We were very excited by the opportunity because it meant keeping our name on this monument,” she said of the historic building.

“We wouldn’t have decided to launch a hotel or a restaurant. We are jewellers and that is our expertise,” she said. “If someone had said we want to open a Birks hotel in Calgary in a building that has nothing to do with us, it probably wouldn’t have been an interesting opportunity for us.”

However, Salette’s plan to undertake the major renovation of the building is a “happy coincidence” that will enable Birks to update its retail store in a part of the city that is also undergoing a major transformation.

“We have slowly but surely been renovating our entire pool of stores across Canada,” said Hartling. “Making sure the store experience matches what today’s consumer wants when they go into a jewelry store.”

Birks recently opened one of its new concept stores at the expanded Yorkdale Mall in north Toronto. It’s a more modern, brighter concept with lighter woods, and long jewelry counters replaced with glass cases and “pods” allowing customers to browse the merchandise in a more relaxed setting.

A new look Birks attached to a luxury Birks Hotel will fit nicely in what will become a rejuvenated part of Montreal expected to draw a more upmarket consumer.

“Our little stretch of Sainte Catherine hasn’t been associated with luxury boutiques,” she said. But, HBC just announced its plan to open its first Quebec Saks Fifth Avenue in 2018 right across the street from Birks, and the city is also investing in a substantial revitalization program for the area.

“The iconic Birks building is a magnificent location to house a luxury boutique hotel on Phillips Square, which will become a luxury retail and lifestyle destination with the arrival of Saks Fifth Avenue’s flagship store and the renovations of the Hudson’s Bay store as recently announced,” said Salette, in a release.

And while the creation of a Birks Hotel was not actually in Birks’ marketing strategic playbook, it should benefit the brand as it expands its wholesale business beyond Canada. The prospect of international, high-end consumers means “more visibility for the Birks brand name globally,” said Eva. “We see this as a good complement to our international wholesale strategy for sure.”

Work on Birks Hotel is expected to start next spring and will take about a year. Birks will keep its store open during the renovations.