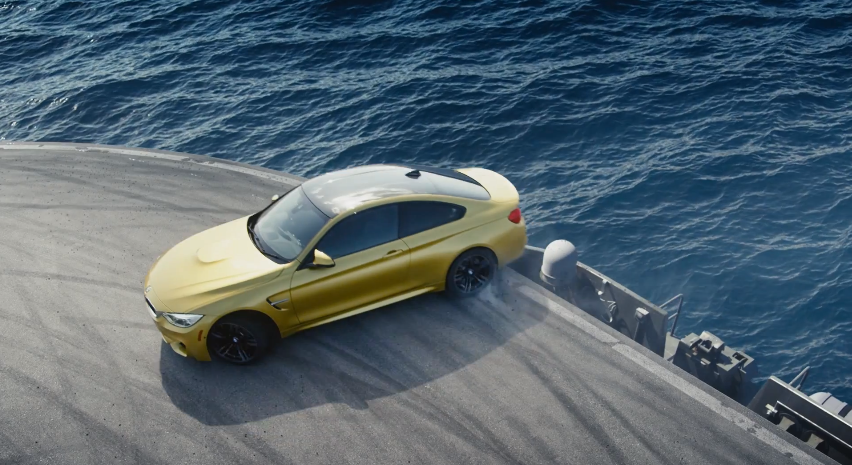 Is it real or not? BMW continues the debate with this latest video for its M4 Coupé

It could be a promotion for the latest installment of the Fast and Furious franchise.

BMW’s screeching, smoking new ad sees an M4 Coupé race around a track. As the camera pans out, it’s not just any track, but a very cinematic one—a massive aircraft carrier in the middle of the ocean. Or, as BMW calls it, the ultimate racetrack.

The video, which took about four months from conception to conclusion, is at the centre of BMW Canada’s campaign for its newly launched M3 Sedan and M4 Coupé.

It appears the German car manufacturer and its creative agency, Cundari, have used some Hollywood tricks for this one.

But whether it’s real or CGI, BMW isn’t commenting on the nuts and bolts of the work anytime soon. The brand doesn’t want to pull back the curtain, so to speak, leaving the debate up to the public.

Kerry Fleiser, brand communications manager with BMW Canada, said the main objective is to spark a conversation and hope the video goes viral.

It’s already beaten expectations, having garnered nearly one million views in 36 hours, making it the most successful video launch in BMW Canada’s history.

Fleiser said the campaign is about getting people talking, from people in the ad and marketing industry to car enthusiasts who debate the performance attributes of the model.

“Within 36 hours of it going live we’ve had 16,000 mentions of ‘ultimate racetrack,’ so regardless of how it’s shot, our intention is that consumers have that conversation.”

It’s the centrepiece of a three-month campaign that includes TV, pre-roll, print and digital takeovers, social media and influencer marketing.

A short snippet of the video will be shown on TV to drive viewers to the full cut online.

The campaign is building off the success of past videos supporting the BMW M Series, including Walls, Helipad and, most recently, the award-winning Bullet, which shows an M5 revving its engine before shooting out of a concrete pipe like a bullet from a gun.

“We didn’t know right at the beginning that this would be a series, but it has transformed into that,” said Fleiser. “We are proud of it… The past three videos have had 12 million views combined, so that’s pretty successful.

“BMW fans are loyal and engaged, so there is a huge appetite out there for this kind of content—the M series even more so. Consumers are always craving dynamic content,” she added.

BMW Canada has also launched its first YouTube brand channel “gadget”—a zone for all things M within its YouTube channel.

The hub page features past videos and educational content for an all-round M experience.