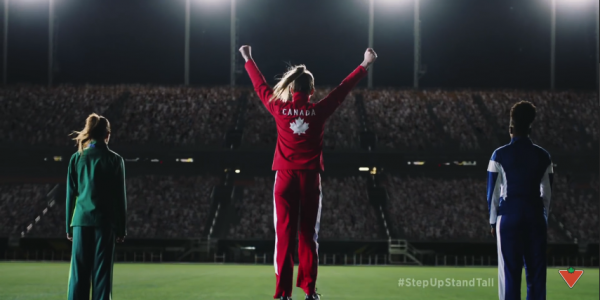 Canadian Tire urges Canadians to step up in Olympic campaign

Canadian Tire is putting everyday Canadians on a pedestal as part of its sponsorship of the upcoming Rio Olympics.

The new campaign from Cleansheet Communications (with media from Touché!) is a celebration of intrinsically Canadian values like sportsmanship and selflessness, said Canadian Tire’s senior vice-president of marketing T.J. Flood.

He said “Step Up. Stand Tall” laddered-up to the company’s three-year-old brand platform “We All Play for Canada,” which is aimed at encouraging play among young children.

“Partnering with the COC was a way to put a stake in the ground in one of the biggest ways in which we are a community-builder, which is that we are an enabler of play,” said Flood. “Our belief is that play, through all of its virtues, creates strong children which leads to strong families and communities, and ultimately leads to a stronger nation.”

Flood called the Olympics a “phenomenal time” for Canadians to celebrate their country and its values. He said Canadian Tire – which kicked off an eight-year sponsorship agreement with the Canadian Olympic Committee (COC) in 2013 – was also keen to build on the success of 2014 Sochi Winter Games campaign, when its “Team Photo” spot featuring NHL star and Team Canada member Jonathan Toews garnered near-universal praise.

Last week Canadian Tire launched a new 30-second spot, “Pedestal,” which Flood called the “anchor” of the campaign. A 60-second version will debut once the Games begin Aug. 5.

Both versions feature typical Canadians “stepping up” onto various platforms in their everyday life – images include a farmer stepping onto a hay bale and Syrian refugees stepping onto their luggage – in a manner reminiscent of Olympic athletes stepping up to the podium.

The spot features an “old-timey” voiceover reminiscent of a political speech (“the creative director said they wanted it to come across as if somebody had started playing a record from 1960 that featured a speech” Flood explained), and concludes with a Canadian Olympian stepping up the gold medal spot on the podium.

The spot also features a new maple leaf emblem created in association with eight COC athletes, including soccer player Sophie Schmidt and wheelchair basketball player Melanie Hawtin. The athletes made a series of impressions by dipping equipment associated with their sport into red paint, with the images subsequently combined into the new logo.

CBC/Radio-Canada’s Olympic Games coverage will also include a prime time feature called “#StepUpStandTallMoments,” which will showcase performances from that day’s competition that best exemplify the campaign’s “Step Up. Stand Tall” tagline.

Two other TV spots, “Wheels” and “Outsider,” will be rotated alongside “Pedestal” once the Games begin. “We’re going to have significant media weight during the Games, so we wanted to have a plethora of ads so that they stay fresh,” explained Flood.

Both ads, which highlight Canadian values like inclusiveness and empathy, use the sentimental approach that has characterized previous Canadian Tire ads like “A Bike Story.”

The “Wheels” ad also reinforces the notion of unstructured play that Flood said was so crucial to fostering creativity and other life skills. The spot opens on a group of young boys playing basketball. When one of the boys chases down an errant shot, he encounters a boy confined to a wheelchair.

The wheelchair-bound boy later finds a basketball sitting on his porch, and wheels himself over to where the boys are playing – only to find them playing in their own makeshift “wheelchairs.” The spot ends with the voiceover, “When the best of us steps us, our nation stands a little taller.”

The 60-second spot “Outsider” opens on the classic childhood ritual of two captains picking teams for a game of baseball, while a young boy of East Indian descent watches from outside the fence.

One captain is mocked by his peers when he invites the young boy to join his team, and their jeers continue when the boy adopts an awkward batting stance that betrays his non-Canadian roots, only for their derision to turn into excitement when he clubs a home run.