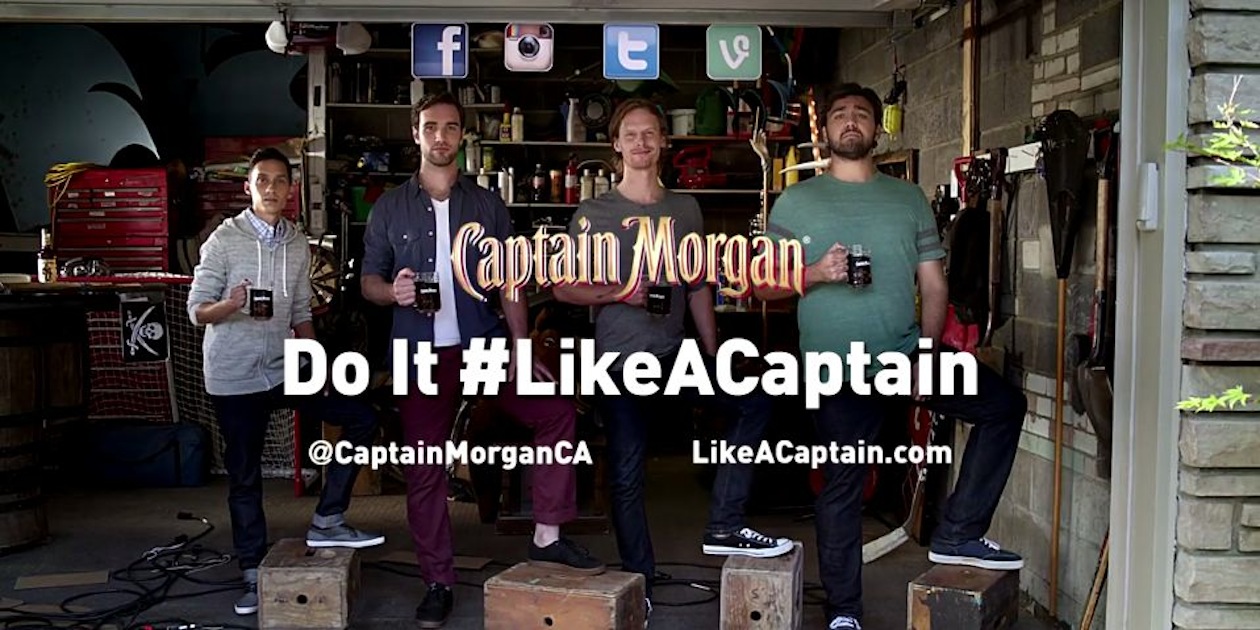 $10,000 for the consumer who best embodies its chief brand character The liquor company is offering a $10,000 reward to one consumer who embodies the spirit of the brand’s signature character through their posts on social media. To enter, consumers must share a photo, video or post to Twitter, Vine, Facebook or Instagram using the hashtag #LikeACaptain.

After the contest closes on Oct. 31, the brand will chose a winner based on their originality, creativity and the effort they put into emulating the spirit of Captain Morgan.

So, what does it mean to live “like a captain?” Captain Morgan’s latest ad by TraffikGroup offers a few suggestions. The ad shows four male friends – a brand trope used by Captain Morgan’s in many markets – living out moments of Captain-style bravado.

Geoff Kosar, marketing director at Diageo Canada, explained the brand had noticed consumers organically using the phrases “like a captain” and “live like a captain” on the social web prior to the campaign and decided to build on that concept.

“We always say our target consumer has a ‘Captain Spirit’ in them,” Kosar said. “Instead of us telling Captain Morgan consumers how they should live, we’re using their content to show us how they live like a captain and express their pirate spirit.”

“Doing it ‘like a captain’ is about much more than just being first, or fast or smart,” added Cam Boyd, co-executive creative director at TraffikGroup. “It’s about taking the ordinary and making it an adventure. Our guys don’t see a wall, they see a door. They don’t see a lock, they see an opening.”

“We’re on a quest to help fans live life ‘like a captain,’ and we’re putting our money where our mouth is,” he said.

The current TV ad is running through the end of October. Once the contest ends, 15-second versions of the spot that show how to date, score goals and camp “like a captain” will continue to run through the holiday season, a key time for the brand.

The media buy for the campaign was handled by MediaCom and includes paid social on Twitter and Facebook, YouTube preroll and promoted media on Xbox. Captain Morgan is one of the first Canadian brands to use Instagram as a paid tool and will promote a short video as part of the campaign.

It also partnered with Buzzfeed, which has posted two pieces of branded content about living like a captain.

Captain Morgan has been posting a steady stream of content hits on its Twitter and Facebook accounts as well. One plays off the popular dating app Tinder, suggesting consumers “Swipe #LikeACaptain,” while another asks, “What Would The Captain Do?”

The brand also created a vine of the drone pouring rum, creating a six-second version of its video ad.

In a further effort to bring the Captain Morgan character to life, the company is touring across Canada, hitting up every single province with an activation by Vibrant Ideation and Marketing that will see an actor dressed as the character visit bars with a team of female “Morganettes.”

The initiative runs from September until April.