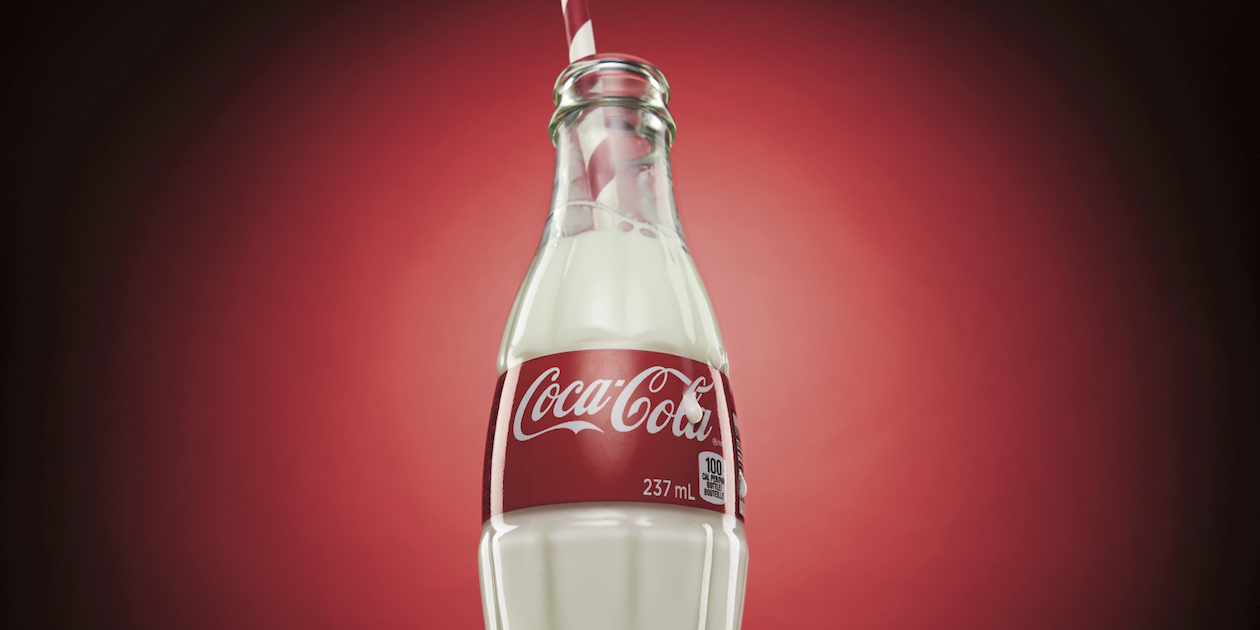 Coke is coming out with premium milk that has more protein and less sugar than regular. And it’s betting people will pay twice as much for it.

The national rollout of Fairlife over the next several weeks is one way the world’s biggest beverage maker is seeking to diversify its offerings as Americans continue turning away from soft drinks.

It also comes as people increasingly seek out some type of functional boost from their foods and drinks, whether it’s more fiber, antioxidants or protein. That has left the door open for Coke to step into the milk case, where the differences between options remain relatively minimal.

“It’s basically the premiumization of milk,” Sandy Douglas, president of Coca-Cola North America, said at an analyst conference in November. If developed properly, Douglas said it is the type of product that “rains money.”

Fairlife, which Coca-Cola formed in partnership with dairy co-operative Select Milk Producers in 2012, said its milk goes through a filtration process that’s akin to the way skim milk is made. Filters are used to separate the various components in milk. Then, more of the favourable components are added, while the less favourable ones are taken out.

Fairlife said its milk has 50% more protein, 30% more calcium and 50% less sugar than regular milk, and is lactose free.

The same process is used make Fairlife’s Core Power, a drink marketed to athletes that has even more protein and calcium than Fairlife milk.

Sue McCloskey, who developed the system used to make Fairlife with her husband Mike McCloskey, said Fairlife milk will be marketed more broadly to women who are the “gatekeepers” for their families’ nutritional needs.

Even while touting its nutritional advantages, however, Fairlife will need to be careful about communicating how its drink is made. Jonas Feliciano, senior beverage analyst for market researcher Euromonitor, noted people increasingly want drinks that “do something for me,” but that Fairlife’s juiced-up nutritional stats may make people hesitant about how natural it is.

“They have to explain that this is not an abomination of nature,” Feliciano said.

Already, Fairlife has been subject to some teasing. After the drink was referenced in Coke’s analyst presentation, comedian Stephen Colbert referred to it as “extra expensive science milk” and made fun of the elaborate way it’s made.

“It’s like they got Frankenstein to lactate,” he said.

Colbert also took a dig at the wholesome image Fairlife is trying to project, noting that it’s made by the “nature loving health nuts at Coca-Cola.” That may explain why Coca-Cola is distancing itself from the product; a representative for the Atlanta-based company referred questions to Fairlife’s outside representative.

In a phone interview, Fairlife CEO and former Coke executive Steve Jones said he thinks his company can help reverse the decades-long decline in milk consumption. Already, major retailers including Walmart, Target, Kroger and Safeway have agreed to carry it.

The drink has started appearing on shelves and is expected to continue rolling out nationally over the next several weeks. It comes in sleek, plastic bottles reminiscent of milk cartons.

At a supermarket in Indianapolis, a 52-ounce bottle of Fairlife was being sold for $4.59. By comparison, the national average cost for a half-gallon of milk, which is 64 ounces, is $2.18, according to the USDA. For organic milk, the average is $3.99.

Fairlife is just one of many ventures by Coca-Cola, which recently took stakes in energy drink maker Monster Beverages and Keurig Green Mountain, which makes single-serving coffee machines and pods.

Over time, Coca-Cola is hoping Fairlife can become a significant driver of growth. For now, Fairlife is still trying to find its footing in the marketplace.

This summer, the company ran ads in the test markets of Minneapolis and Denver featuring women wearing nothing but milk splashes in the shape of dresses. The images were accompanied by phrases like, “Better Milk Looks Good On You,” leading them to be deemed sexist in some corners. Jones said the ads were intended to be “disruptive,” since new products need to grab people’s attention.

But moving forward, he said Fairlife will focus on its authentic milk taste in national marketing, which will roll out around the end of March or April.