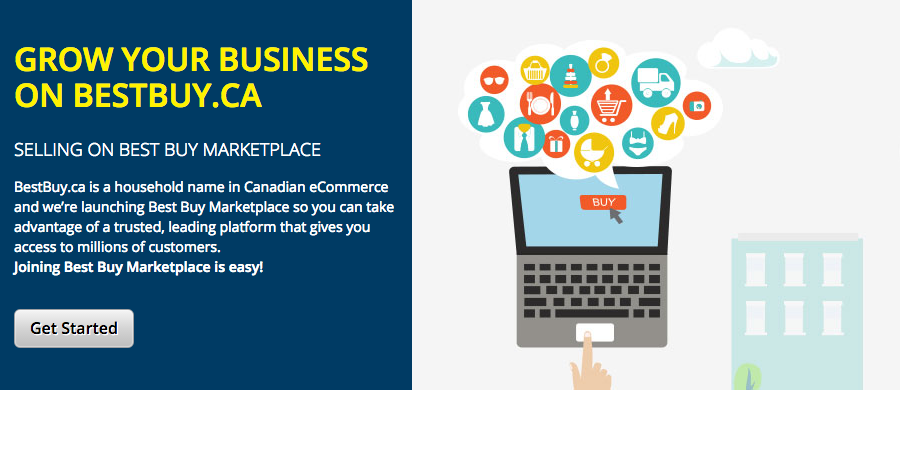 Retailers today know one thing for sure: they have to be more like Amazon. Best Buy just got one step closer.

Best Buy Canada announced last week that it’s launching a new omni-channel platform called Marketplace. But it’s not just about selling more electronics online. Best Buy is inviting other retailers to sell their products on BestBuy.ca, allowing shoppers to use its 192 bricks-and-mortar stores to pick up third-party goods and process returns.

Partnering with other retailers to boost sales and drive traffic might seem paradoxical. But experts think it’s a sound strategy and a smart investment.

“I think they’ve one-upped Amazon in a very big way. They’re offering the convenience of a true online/offline bricks-and-clicks environment, which Amazon of course doesn’t have,” he said. “Time and time again, people like to have the in-store experience alternative, people they can talk to, goods they can touch. And Best Buy has that in spades.”

The new Marketplace is part of Best Buy’s two-year, $200 million investment in its brick-and-mortar and online stores. The strategy includes introducing major appliances in all locations and increasing staffing levels. As part of its online investment, it also announced a new “ship from store” feature that will transform the company’s stores into distribution centres. With items shipping from stores, customers will have greater access to inventory rather than be limited to what’s available from e-commerce distribution centres.

Best Buy hasn’t announced its Marketplace retail partners, but the platform is expected to launch before the 2015 holiday season. In a press release, Best Buy said it will allow its retail partners to maintain “their own distinct voice, their own brand identity and a customized, transactional storefront on BestBuy.ca.”

The company will charge a fee to retailers, which will help Best Buy recoup its e-commerce investment. “For the retailer, it is so costly to build out [e-commerce] websites now… so this is a way to increase your revenues without having to carry all this stock or get into a business you don’t know,” said Maureen Atkinson, senior partner at J.C. Williams Group, a Toronto-based retail consultancy. “It also means that people can spend more time on your website. It gives people more reasons to [visit].”

The challenge for Best Buy will be getting consumers to think of the store as more than a place to buy TVs and computers. “I think the logical space for them to be in is to partner with other retailers that have similar customers and similar interests,” said Atkinson. “It’s an electronics store, so [Marketplace] is probably going to have to do with younger male shoppers who are more-tech savvy.”

Kuhn said as long as Best Buy grows smartly with complementary products, “this could be very successful.”

“Making a massive technology investment is always a risk,” said Kuhn. “But my sense is that they’ve got a fairly focused strategy and I’m sure they’re mitigating the risks… Things change on a dime online, but I give them full kudos for taking an offensive strategy and not being typically Canadian, which is to plug holes in a leaking ship.”