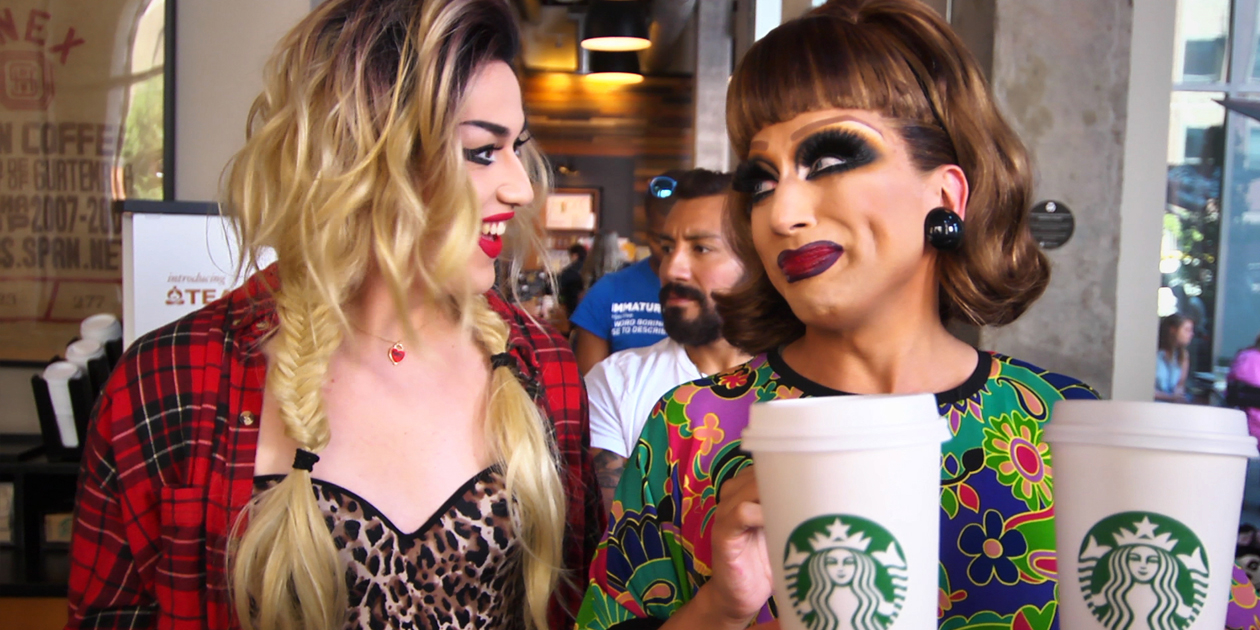 The coffee chain is one of many brands targeting LGBT consumers

Adore Delano and Bianca Del Rio, two drag queens who rose to fame after appearing on RuPaul’s Drag Race, star in a new spot by the brand called “Coffee Frenemies,” released Wednesday in partnership with OutTV.

Shot during WorldPride 2014 in Toronto last June, the ad shows Delano (Danny Noriega) skipping the line at a Starbucks in the city’s west end. She’s successful until she runs into Del Rio (Roy Haylock), who brutally shuts her down.

A Starbucks barista ends the argument by delivering a latte to both queens. It ends with the tagline: “Saving friendships since 1971.”

The ad, uploaded to OutTV’s YouTube channel, has garnered 210,000 views in just one day. At press time, the video was averaging 10,000 views an hour.

Danks said Starbucks was one of several brands that approached the channel looking to do marketing around WorldPride, a global version of the Pride festival that cities bid on like the Olympics.

With Toronto playing host to the festival in 2014, Danks said Stoli and HSBC also came to OutTV looking for activation ideas.

Danks said his team knew several of the RuPaul Drag Race finalists would be in town for the festival and pitched Starbucks on shooting a commercial with them. The brand signed off on the idea and enlisted OutTV to produce the video in-house.

A rep for Starbucks Canada told Marketing the company “embraces diversity,” adding, “With WorldPride in Toronto this year, we were excited by this opportunity to do something fun to celebrate with our partners and customers.”

On the day of shooting, Danks said interest from fans was so high that the brand had to move the shoot to avoid disruptions from fans who wanted to meet the queens.

He said he’s already seen a positive reaction to the ad from the gay community and believes it will create goodwill for Starbucks amongst LGBT consumers.

“This was a bold experiment for Starbucks and I think they should be absolutely commended for taking this step,” he said. “And they’re reaping the benefits of it now – this video is global.”

Brands ride the wave of a drag revival When OutTV launched in 2006, many warned the network not to touch drag programming. The team was told, “It’s old, it’s something the community shuns,” Danks said.

Today RuPaul’s Drag Race is the channel’s tent-pole property and another drag-themed program, The Drag Queens of London, is doing extremely well for the network.

As drag enjoys a reignited rush of popularity, brands are taking to the art form, too. This fall the retailer American Apparel tapped three drag queens from the show to be spokesmodels for an ad campaign, and created a limited line of t-shirts featuring the TV stars.

The show itself has had a range of sponsors, from the gay hookup app Scruff to Absolut, which signed on early on in its production. It has shamelessly branded everything from segments to the underwear its muscled “pit crew” wears on camera.

For advertisers, working with drag performers can help a brand show LGBT consumers it wants to be part of their community, Danks said.

“When you do something with drag, you’re making a really strong statement,” said Danks. “You’re pretty clear about what you’re saying and who you’re speaking to when you use drag performers.”

“The community is really sensitive to brands that communicate to it directly and state: ‘You’re important to us,’ ” Danks said. “That resonates and goes a long, long way in this community.”