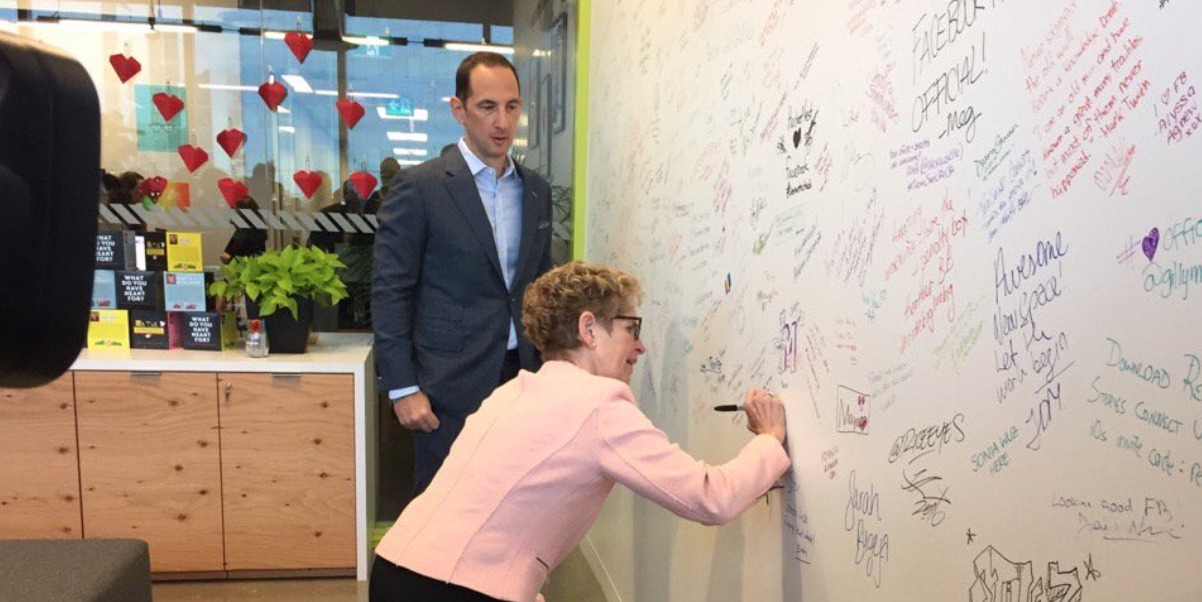 Heart & Stroke and others share how they're using social in marketing

Facebook Canada used the opening of its new headquarters at the MaRS Discovery District on Thursday to unveil its plan to offer quarterly “office hours” to non-profit organizations that want to learn more about how to use the social platform, including Instagram.

The brightly lit space, which eschews individual offices for clusters of computer equipment and includes an event area that can accommodate 200 people, was unveiled as part of Global Causes Day, a Facebook event that connects its team with charities and other organizations where they can contribute their time and expertise. Approximately 150 people were part of the event on Thursday which featured remarks from Ontario Premier Kathleen Wynne and a panel of charities who have found success with the platform.

Jordan Banks, Facebook Canada’s managing director and global head of vertical strategy, told Marketing while the details around the quarterly office hours are still being developed, they will essentially provide an ongoing opportunity for non-profits to learn, ask questions and offer feedback about engaging donors and other stakeholders via social.

“I’ve seen a real increase in the sophistication of how non-profits are using Facebook. It’s way beyond the traditional marketing funnel. They’re thinking about it in a new way,” he said, highlighting social media as a mechanism for storytelling as well as traditional advertising. “We live in a stories economy, and he or she who tells the best stories wins.”

One of the organizations using Facebook for storytelling is the Heart and Stroke Foundation. Geoff Craig, its chief marketing and communications officer, described the social platform as his No. 1 digital tool in terms of generating a return on investment (ROI), but it didn’t necessarily start that way. At one point, he said the Heart and Stroke Foundation had some 60 different Facebook pages, which were updated randomly and inconsistently.

Over the past four years, however, the organization has settled on three pages: one for each official language and one focused on its lottery activities. There is also a content calendar in place so that posts are more targeted and relevant.

“We don’t just look at it as a Facebook strategy. It’s about investing in a digital strategy,” he said. “It’s Facebook, it’s the web, it’s email, it’s search, it’s CRM.”

Rather than trying to solicit money, for instance, Craig said the Heart and Stroke Foundation used Facebook to capture email information, which can then be used for other marketing purposes. “As a donation system, it’s okay. Only okay,” he said.

In the long term, Banks said he expected non-profits to follow the lead of other brands in shifting at least some of their attention towards specific use cases around Instagram, where the goal should be “thumb-stopping creative” as users scroll through their feed.

“It’s the best platform for an emotive story with visual creative,” he said. “I think what you’re going to see over time in terms of (marketing) journey is tying Instagram and then Facebook to your business objective.”

Facebook is a critical tool to our marketing mix. It allows us a direct channel to targeted audiences, and significantly supports our business from both the mission and fundraising sides. For fundraising within the platform, the attribution is less direct. We don’t use it for direct response fundraising, but rather to support an over arching fundraising appeal – which is exactly how Facebook recommends using the tool.

As mentioned Facebook is our highest ROI tool and we appreciate their commitment to charity giving. Thanks for a great day!