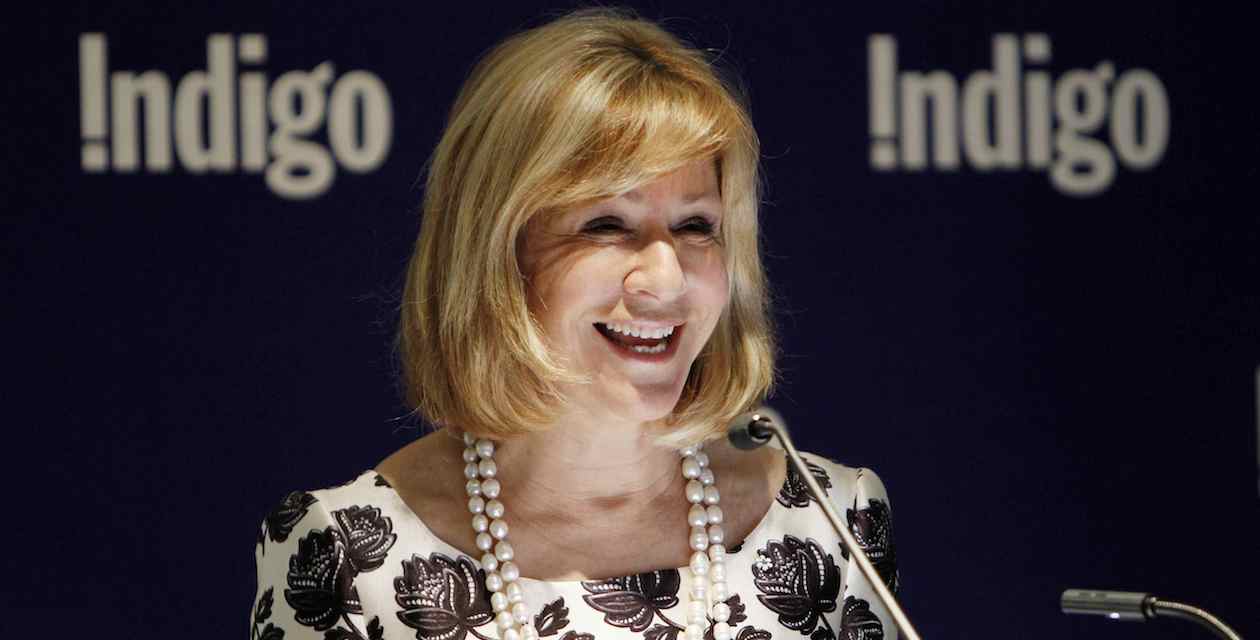 Indigo's CEO talks about her future-looking 'beyond books' strategy

Over 30 years, Heather Reisman built Indigo into one of the world’s pre-eminent booksellers, with more than 200 stores across Canada. As competition from Amazon and e-readers forced other chains into bankruptcy, Reisman undertook an ambitious plan to move beyond books and expand its offerings of general merchandise. Indigo opened a design studio that develops exclusive products for the chain and also signed a partnership to operate American Girl boutiques across the country. So far, the plan is working. Revenue increased by 11% in fiscal 2016, while online sales grew by 15.3%. The company also turned a $28.6-million profit compared to a loss in the previous year.

Your new Toronto store at Sherway Gardens is Indigo’s first large-format location since 2010, and the first built around your concept of turning a bookseller into a “cultural department store.” How did the idea develop?
The store is the realization of an idea I’ve had almost since I launched Indigo. When I put together an initial memo to myself about the store, I wrote down, “A book lover’s cultural department store.” I always thought that the more shopping I could do in a bookstore, the happier I would be. So even in our first store, we had a paperie; we had a small gift shop; we had music and movies; we had a flower shop. But the real work of imagining a cultural department store started at the same time we launched our e-reading effort with Kobo. We knew it was time to reimagine the core bookstore experience. As people and consumers, we are evolving. There are some people who will long for the old-fashioned dusty bookstore, but most people don’t. In the 21st century, people are “phygital”—that is, they do some things digital and some things physical. So what role does the physical environment play?

As part of this reimagining, you’ve entered into partnerships with American Girl, Fitbit and Rifle Paper Co. How do you decide which brands are a good match with Indigo?
The products come second. It’s the ideas that come first. We have an opportunity to bring into the foreground the big ideas that are influencing us right now. So unplugging is a big idea. Early literacy is one. Eating real food is a big idea. We have seven or eight big ideas we’re constantly cycling through as we plan each season. We consider the big ideas we can amplify and use to connect with the customer. We have this crazy opportunity, because there’s nobody who’s written a book who won’t talk to us.

So it still starts with books?
Exactly.

Who decides which big ideas are worth focusing on?
Anybody at Indigo can say, “I’m really into this thing.” And then we look at it, and we say, “Is it a fad?” So adult colouring books are a fad. But what’s behind that fad—the desire to unplug, the desire to build our hand-brain connection in a different way—is bigger than colouring. And we have a process. We think of Indigo like a magazine. We put out nine “issues” a year—that is, the store turns over nine times per year. And online even more.

Once you’ve chosen your big ideas, how do you pick products to match? There’s a risk the store will lose some of its identity as you expand the selection.
You can always find things that are beautifully designed, but they have to amplify one of our big ideas. Otherwise the store will get full of stuff, and then you don’t know who you are. I would rather have fewer products in the store. Our merchant team will get upset because they’ll show me something and say, “This is selling—it’s really selling.” And I’ll say, “But do we all agree this is really ugly?” And they’ll say, “It’s not that nice, but it’s selling.” And so I say, “Let’s go find a better one.” Because there’s enough junk in the world.

Your partnership with American Girl has proven successful. I confess, I never quite understood how that connected with your core business.
Oh, but the American Girl doll books are unbelievable! Every one of them has an embedded life lesson. So well before we did the shops, we were huge on the books.

When you started expanding beyond books, children’s products were one of the first things added. What are the big ideas in that area?
We’re launching a big focus on teaching kids how to code. Coding will become a second or third language. So we’re selling littleBits, which are electronic building kits, and have other items coming in.

Why wait until now to open the first new store guided by this revamped strategy?
Naive or not, I believed in the vision from the beginning. But we couldn’t have made this happen four years ago. We had to change every single thing about how we do business. We got to be really good at selling books. But as it turns out, selling books is probably the easiest retail business. If you buy too many, you can send them back. If you don’t buy enough, you can call the publisher. As soon as you start selling other products, you own the merchandise. Now we need merchants and a supply chain, and we need to know how to merchandise. We needed to learn how to do all these things.

What was it like, going through that process?
Reinvention is like if you had a little house on a wonderful piece of property, and then an old, loving aunt dies and leaves you a ton of money. Now you’re going to completely rebuild on that lot. But the only constraint is you have to live in your house while you’re rebuilding it. That’s what this is like. All the while, there are the nattering nabobs from the outside who say, “Indigo won’t succeed—their numbers are going down.” There’s lots of negativity coming in.

How did you deal with that?
Even if you have a strong vision, you’ll have moments at 3 a.m. when you question yourself. So you need people who believe in you. In my case, I have the world’s greatest partner in my husband [Onex CEO Gerry Schwartz]. He has extraordinary long-term vision, and he’d say all the time, “Just remember, you’re going through the valley, but you’ll get to the peak.” And you need your board to support you. Gerry’s on it, and so is Mitch Goldhar from SmartCentres, who knows retail. He was the most positive supporter. When I would say, “Our numbers are lousy this quarter,” the board would say, “That’s OK. We know where you’re going.” They’d ask: “Are the numbers bad because you are spending money to learn what you need to know?”

What else does it take to execute this kind of shift?
You need to have a reasonably strong balance sheet. If you’re heavily in debt, you’re in trouble.

So was the decision to sell Kobo for US$315 million in 2011 meant to strengthen the balance sheet?
No, but when we sold Kobo, that just insulated us. We had a good balance sheet, but afterwards, we had an even better balance sheet. What I said all along was, “We’re not going to touch that money, but I’m prepared to spend 100% of our [earnings].” At one point, we had close to $80 million in EBITDA, and we went down to less than a million. That wasn’t just the loss on our book business, it was what happened as we invested in the supply chain and software, and our design studio. Now we have all of that, and the earnings are going back up. To innovate, you have to take risks; you have to make mistakes. I would worry about any company with an EBITDA that only goes up. At some point, for any company, you have to reinvest.

Since you sold Kobo, sales of e-readers have stagnated, while book sales are going up. Did you predict that shift?
No, I saw something else. The CEO of our bank called when I decided to sell Kobo and said, “Heather, how could you do this? You built the first big Canadian tech company since BlackBerry! How could you sell it when you’re growing?” Here’s the thing—we had an amazing offer, first of all. And, second, our competition was Apple and Amazon. That’s all you needed to know. They were true technology companies, and we were not. We got in early and did well because we had a talented team, but I knew eventually that was going to erode.

Speaking of Amazon, you do compete against it in online retailing. What’s the interaction like between your digital business and your bricks-and-mortar stores?
The majority of our customers are shopping online and in-store. All digital purchases represent about 15% of our sales, and that’s growing really nicely. And my firm belief is when you’re online, you have no choice but to meet what the online pricing is. So we’re identical to Amazon. That’s the nature of the game. We don’t make money online—we don’t. But we can’t be in business and not serve our customers that way. If something were to happen and tomorrow nobody came into our stores, I wouldn’t stay in the online book business. Not even Amazon makes money in the online book business.