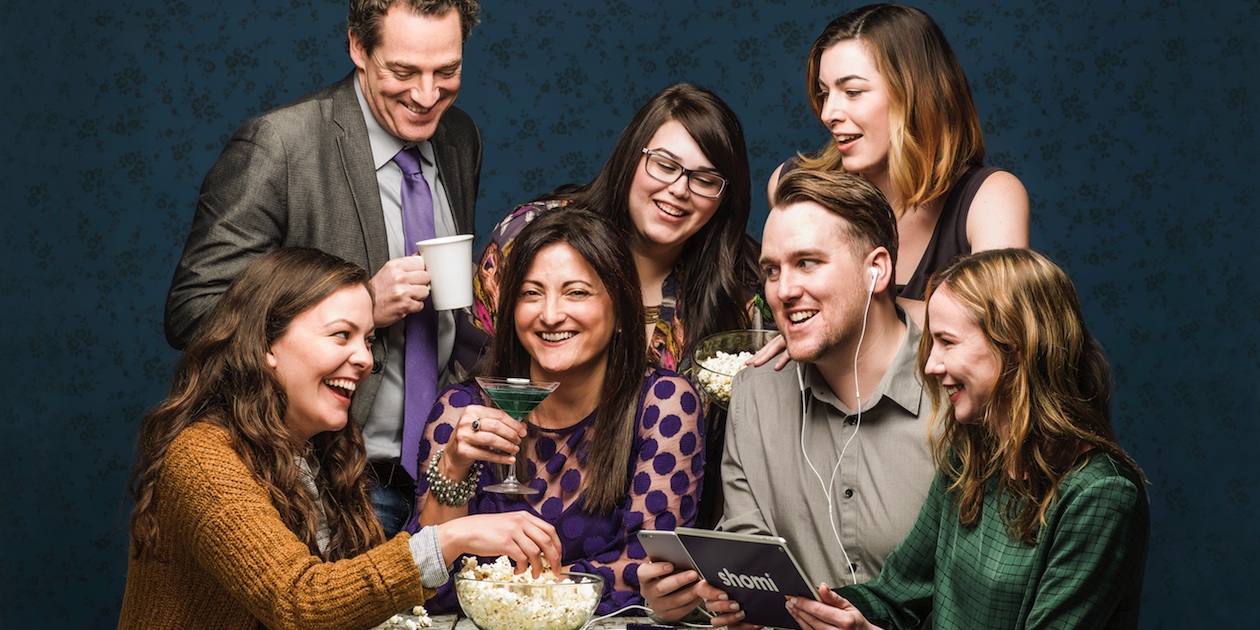 Even though it had two of the country’s largest media companies with extensive libraries of binge-worthy content and deep pockets behind it, there was no guarantee Shomi would be a success.

The unlikely pairing of competitors Rogers and Shaw raised important questions. Could these two companies successfully operate an upstart business in a space dominated by Netflix, the very company that had so disrupted their businesses to begin with? What would this look like from a marketing standpoint? What story would the advertising tell? And would it be enough to convince Canadians to give Shomi (pronounced “show me”) a try?

And though Rogers has openly pledged to improving customer service under president and CEO Guy Laurence (investing $100 million in 2015 and an additional $100 million in 2016), would the company’s past affect the Shomi brand? Marketing’s editorial team was skeptical. But we’re big enough to admit we were wrong. Very wrong.

Shomi responded with a sleek interface, an impressive catalogue of must-watch fare, a catchy ad campaign, strong media communications and an entrepreneurial spirit that gives it the agility to pivot in response to consumer feedback.

“We like to think we operate like a nimble startup and have the entrepreneurial bent,” says Rita Ferrari (pictured), senior director, head of marketing and communications at Shomi.

Shomi has made a concerted effort to listen to consumers and makes changes based on feedback, she says. For instance, after opening the service to all Canadians (it initially beta tested it with just Rogers and Shaw customers), consumers said they wanted greater choice when it came to payment methods. Shomi quickly addressed the issue by introducing credit card and debit payment options, and it continues to make adjustments accordingly, says Ferrari. The team is also active on social media and really strives to have that one-on-one dialogue and connection with subscribers, she says.

“The discussions with the senior leadership here is that we need to really get out there and understand what our customers are saying, and to show that there are people behind this brand,” she says.

“For me, our ability to show that human side and that we’re actually a small company that really cares, and we’re starting to really see the benefits of that in terms of how customers and Canadians talk about Shomi that I think is really positive,” says Ferrari.

Inside Marketer of the Year

The service operates as a standalone entity from Rogers and Shaw with its own management team and employees and no mention of its parent companies in its advertising. Even through Shomi’s consumer research revealed its ownership structure wasn’t a detriment to the brand, standing on its own is a smart move given consumers’ discontent around the country’s wireless and cable companies, says Ela Veresiu, assistant professor of marketing at York University’s Schulich School of Business.

Pushing the human side of the Shomi brand has been an important differentiator from other streaming video on-demand (SVOD) services such as Netflix and Crave TV. Rather than rely on a recommendation algorithm to drive viewer activity, as is the case for Netflix, Shomi’s team of screenwriters, directors, producers and photographers manually curate categories of content.

At launch, Rogers and Shaw promised “more bang, less blah” with its content and have delivered with hand-picked recommendations and collections selected by guest curators including NCIS: Los Angeles star LL Cool J.

“Algorithms are great, but [once] you provide preferences, you get the same content over and over and it becomes exceptionally difficult to discover something new,” says Ferrari. “With curation, you find stuff you thought you’d never watch.”

As SVOD increasingly becomes a battleground for eyeballs, it was important Shomi hit all the crucial touch points, clearly communicate its brand benefits and set itself apart from video streaming’s dominant player, Netflix.

Used by more than one third of English Canadians and boasting 90% brand awareness, Netflix has a strong foothold in the market and has launched advertising campaigns that have not only resonated with consumers, but caught the attention of both the Cannes and Marketing Awards juries as well.

With Netflix’s four-year head start, Shomi needed to enter the market with a defined brand personality. When Shomi first launched in beta in November 2014 with 1,200 movies and 340 TV series, it also launched a highly visual campaign that captured the brand’s spirit and playful tone of voice.

The launch effort was “intended to provoke direct interaction with individual Canadians,” says Ferrari, with taglines playing off the Shomi name such as “Shomi something funny,” or “Shomi what’s good.”

“[Shomi] came with a very catchy and phonetically fun brand name,” says Veresiu. “It’s a fun play on words and it has followed through in all its advertising to make it really fun and personable.” While the campaign spanned various media, including television and in-cinema activations, out-of-home did a lot of the heavy lifting in nearly 20 markets nationwide within the Rogers and Shaw footprints. It took over Toronto’s Yonge-Dundas Square, and people in every major market saw the Shomi logo on spectaculars, wall murals, standard billboards and TSAs promoting its binge-worthy content.

Working with its media agency OMD, Shomi rotated the creative on its OOH buy every two to four weeks to spotlight eight key television shows, including critically acclaimed Jane the Virgin and Sons of Anarchy. The strategy was a massive undertaking for the brand and, according to Shomi, the effort generated more than one billion impressions during the 90-day campaign run.

City centre’s were awash in the brand’s signature purple, and television commercials aired in heavy rotation, indicating an impressive media buy but also running the risk of potential advertising fatigue – a point not lost on Ferrari and her team.

“We’re in the business of entertainment, and when the marketing stops being entertaining, then we have a challenge on our hands,” she says. “We were very conscious of fatigue and we were very careful with how we planned out our campaign and ensured we were able to change things up… All the things we did were different enough [that] we were confident there wouldn’t be a fatigue factor.”

“What we ascribe to is the ability to test and try stuff,” says Ferrari. “But the other key component is [that] we’re an entertainment company, and when we market, we also want to make sure we do it in a fun and engaging way that reflects what our brand is all about.”

Shomi paid as much attention to promoting high-profile shows as it did the brand as a whole. For instance, in October it posted the first episode of British mini-series The Enfield Haunting to Facebook, marking the first time a Canadian entertainment company posted a full episode of a TV show to the social network.

The tactic let the company reach both its existing customers, who might have shared the episode with people in their network, while also exposing potential new subscribers to the service.

“The goal there was to create for us a list of customer leads… and retarget digital marketing to them,” says Ferrari. Shomi won’t disclose viewer numbers, but Ferrari said they were “thrilled” with the results, “which is why we’re going to continue trying this out with different genres of content to see what it can do in the long run in terms of acquisition and engagement.”

With the recent sale of Shaw Media to Corus Entertainment, questions now surround the future of the brand’s marketing.

“It’s really early days and there’s nothing I can really say about what the impact might or might not be on us,” says Ferrari. “I don’t think from a marketing standpoint we would do anything differently because what we focus on is the customer and what Canadians want. We believe we’re heading in the right direction and that’ll just continue regardless of what the ownership structure might or might not be.”

But as far as 2015 was concerned, Shomi’s marketing strategy has not only helped it battle Netflix, but also given it momentum against Bell Media’s CraveTV, which launched just one month after Shomi. According to research from Toronto-based Solutions Research Group, Shomi is edging out CraveTV among Canadians on the brand awareness front – 76% and 69% respectively.

Fast forward to November 2015 when deliberations for Marketing’s Of The Year program kicked off. As we argued the merits, creative brilliance and metrics-moving strategy of the marketers on the shortlist, the editorial team was impressed by Shomi’s utter tenacity, among other things.

Successfully building a brand from scratch, going head-to-head with a category leader and a second hungry upstart, is no easy feat. It’s one that is certainly deserving of Marketer of the Year status.

Marketer of the Year – Top 3