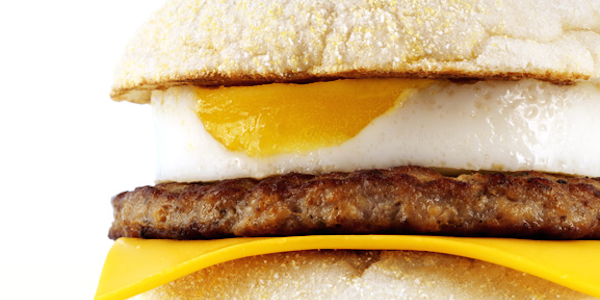 McDonald’s to offer all-day breakfast in the U.S. next month

If you’re one of those people who hates missing the end of breakfast hours at McDonald’s, hang on just a little longer: the chain says its breakfast menu will be available all day starting Oct. 6.

Items like Egg McMuffins, hotcakes, sausage burritos, fruit ‘n yogurt parfaits, hash browns and biscuits will be available anytime, though the exact menu will vary in different markets. The company said core items like the Big Mac, McNuggets and fries will still be available at all of its locations.

The Oak Brook, Illinois-based company has been testing an all-day breakfast menu in San Diego for months. It has been looking for a boost, as sales at established U.S. stores have fallen for seven straight quarters and the company hasn’t replaced its Dollar Menu with anything equally compelling.

McDonald’s is also working to improve its food by toasting buns longer and searing burgers to improve taste, and it’s looking for a way to shake up its image.

Taco Bell, a unit of Yum Brands, launched a breakfast menu in 2014 and has said the “biscuit taco” and other items have lifted its sales. Earlier this year Taco Bell ran an advertising campaign that depicts McDonald’s and its Egg McMuffins as boring. Meanwhile the company has lost some ground to restaurants like Chipotle, which tout better food and ingredients, and to newer burger chains like Five Guys Burgers and Fries.

McDonald’s plans to close about 700 stores this year and will shut down more stores than it opens in the U.S., something it hasn’t done since at least 1970 and possibly in its entire corporate history. The company is reorganizing so it can respond more quickly to trends, cutting costs, and has eliminated a few hundred corporate jobs.

Mike Andres, president of McDonald’s U.S. acknowledged the company has struggled with an overcomplicated menu, and that restaurants would remove some items to make room for the breakfast offerings throughout the day. Core menu items such as Big Macs will remain national. But in Nashville, for instance, restaurants will remove all McWraps and the Clubhouse burger. The items that are removed will vary by region.