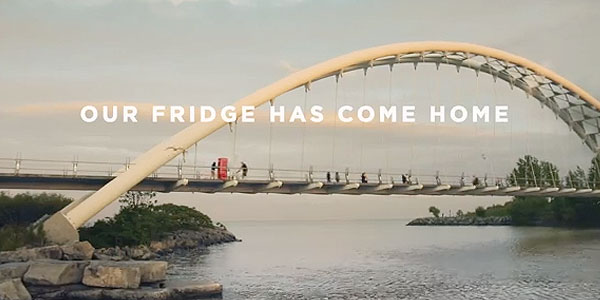 After a 17,000-kilometre jaunt through Europe and Indonesia, the award-winning Molson Canadian Beer Fridge has returned to its home and native land for a new Canada Day campaign.

But where a Canadian passport was required to open the previous iteration of the fridge, this new Molson Canadian-stocked fridge remains locked until someone sings a passable rendition of “O Canada.”

“We don’t walk around carrying a passport, but what we do walk around with is patriotism on our sleeve,” said Darren Quinton, brand manager for Molson Canadian at Molson Coors in Toronto. “With Canada Day fast approaching, it made a lot of sense to marry the anthem to the Beer Fridge.”

Molson Coors plans to showcase the fridge at the Great Canadian Cabin in Ottawa’s Byward Market on Canada Day, followed by an appearance at the Pemberton Music Festival in Pemberton, B.C. on July 14.

Molson agency Rethink has also created a two-minute online video showing various attempts to open the fridge. In addition to YouTube, the video is also featured on the Molson Canadian Facebook page and MolsonCanadian.ca.

“We feel it could be a great piece of sticky content that people will share,” said Quinton.

Rethink partner and creative director Aaron Starkman said a Canadian-specific twist on the Beer Fridge was a natural evolution of the highly successful program, which recently won Best of Show at the Marketing Awards.

“There was nothing in the brief that mentioned doing the Beer Fridge over again, but it just seemed right to us to bring it back home with a twist,” he said.

Canada Day has emerged as a key sales and marketing period for Molson Canadian, with an average of 12 million bottles sold in the lead-up to the holiday. Previous marketing efforts around the holiday have included 2012’s “Canthem” and the first iteration of the Beer Fridge in 2013.

“We’re very fortunate to be a beer that’s synonymous with this great holiday, and over the last few years we’ve been able to unlock a lot of great creative that’s some of the best work we’ve done in the past decade,” said Quinton. “This piece really adds to that and helps us tell our Canadian story in the lead-up to a key sales period.”

Starkman said it is an occasion that allows he and his creative partner, Mark Scott, to tap into Canadian pride.

“It’s one of those moments where there are no messages about deals on cases; we can just be very singular in our mindset and deliver what we need to—which is ‘This is the beer you should drink on Canada Day,’” said Starkman. “We want to make it feel wrong or almost weird for people to hold any other beer in their hand.”