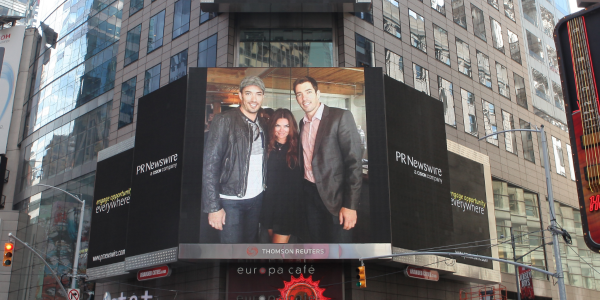 NKPR is teaming up with the “Property Brothers” during next month’s Toronto International Film Festival to create a five-day experiential activation called the NKPR It House x Producers Ball.

Drew and Jonathan Scott, creators of the home improvement reality shows Property Brothers and Brother vs. Brother, have for several years been running Producers Ball, an evening fundraising event for the industry. NKPR has operated a lounge for the last 10 years during TIFF.

NKPR president Natasha Koifman says she and the Scotts have talked over the years about partnering and “this year, we collectively looked at what we could do together and it kind of made sense.”

Along with the Producers Ball, the NKPR IT House x Producers Ball will feature a celebrity portrait studio, space for media interviews and sponsored programming and activations. It will take place Sept. 7 to 12 near TIFF headquarters in the Bell Lightbox in a 7,000 square foot, two-storey lounge space at Richmond and Peter streets. The location was previously a nightclub and will act as a showroom for a future condominium development.

Proceeds will go to Artists for Peace and Justice, an organization that supports communities in Haiti through education.

Last year NKPR had a lounge of about 800 sq. ft. in the festival building and was an official TIFF partner. This year – as in previous years with the exception of 2015 – it’s on its own, but Koifman says relations with the festival are good.

Details have not been finalized, but the goal is to find “sponsored partners that are prepared to create an actual experience as opposed to an activation,” Koifman says. “It’s less about the activations and more about creating an experience.”

She would not disclose how much is being invested but says it’s the largest amount since NKPR started hosting lounges at the festival in 2006.

Koifman adds an incident involving Jonathan Scott is “not remotely a concern.” Scott avoided charges stemming from an April 24 bar fight in Fargo City, North Dakota after the Fargo city attorney said there was a lack of evidence. “I couldn’t be more honoured or proud to partner with them. They are some of the most grounded people that I know.”