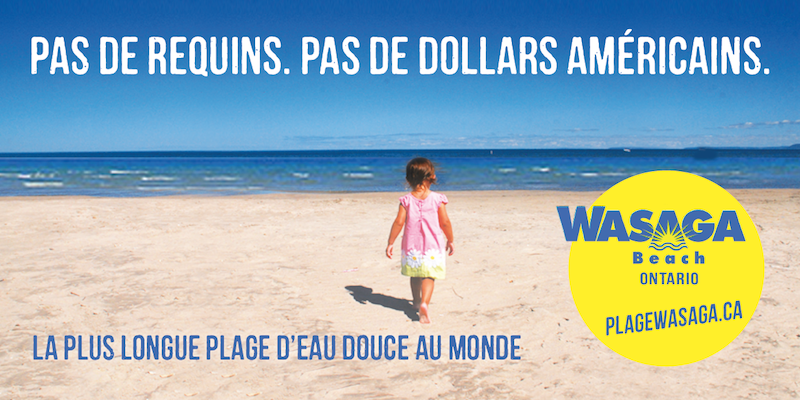 Quebec campaign for beach town grows awareness on a budget

The Town of Wasaga hired Toronto’s Headspace Marketing to attract vacationers from Quebec during the province’s two-week “Construction Holiday,” a prime vacation time that begins on the second-last Sunday of July. Headspace’s specific mandate was to increase awareness of the region and convince Quebeckers to consider a road trip there.

The challenge: according to results from a May Léger Marketing survey for CAA-Québec, only one in five Montrealers had plans to travel to Ontario this summer (and even fewer outside Montreal planned to make the trip). Moreover, most in Quebec had never heard of Wasaga Beach, which had a weaker brand identity compared to Ontario’s larger vacation destinations such as the Niagara region.

The third challenge was budget. With only about $25,000 for media and production, Headspace said they couldn’t afford a carpet-bombing approach.

The agency identified young, social Quebeckers as the best group to target, hypothesizing that they would be more likely to make spontaneous decisions about a trip, be more positively disposed to vacationing in Ontario and be more at ease if French was not spoken. (The agency subsequently backed up that hunch with a study by Decima Research for the Ontario Tourism Partnership Corporation and Industry Canada from 2006.)

Faced with the problem of how to distinguish Wasaga’s identity, Headspace went with a simple ad showing an attractive beach image and the tagline, “Pas de requins. Pas de dollars Américains. (No sharks. No U.S. dollars.)” The agency also put a spotlight on the fact that Wasaga boasts the longest freshwater beach in the world.

Headspace constructed a dedicated French-language Wasaga website, including a contest to win a holiday package to the beach. They also created a Facebook page and partnered with Bell Media to develop a radio program starting July 7 targeting the greater Montreal area with short spots on Rouge FM and NRJ (the latter reaching younger listeners especially).

In online surveys of 300 Montreal area residents conducted the week before the campaign began and the week after, awareness of Wasaga Beach went from 38.2% to 47.6% among the 18-34 group in the two-week long campaign period. Intention to visit this summer or next also increased by 8%. The French Facebook site also attracted 1,000 followers.

“Awareness and intentions to visit increased significantly over the course of only two weeks,” said Eric Blais, president of Headspace.