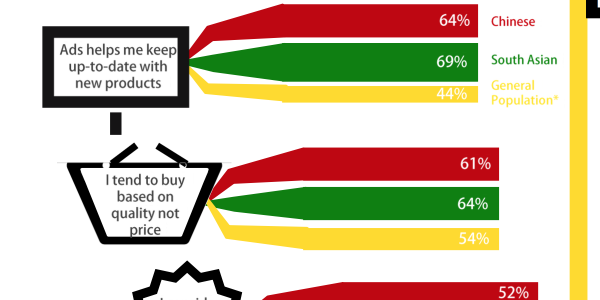 South Asians and Chinese Canadians have a very different relationship with brands than the general population, according to new research from IPG Mediabrands.

The media firm’s 2016 Multicultural Media Study surveyed 1,250 Chinese and South Asians in Toronto and Vancouver. The study, which also sourced data from Statistics Canada and Vividata, was first conducted in 2012 to better understand these significant audiences. Stats Canada forecasts that by 2031, the Chinese population will increase by 80% and the South Asian population will increase by 131%.

The study found that 64% of Chinese and 69% of South Asian Canadians believe that ads help them keep up-to-date with new products, compared to 44% of the general population.

“There is a significant reliance on advertising amongst these two particular groups, and that’s very likely to turn into a loyal consumer,” said Loraine Cordery, marketing & insight manager at IPG Mediabrands.

“We do see across the whole shopping process that these [groups] tend to be more open to advertising, more confident in the brands they’re choosing, and more loyal to them.”

While that’s good news for marketers, ethnic consumers pose different challenges. For example, 51% of Chinese respondents tend to stick to brands that they’re familiar with from their home country, and 46% pay more attention to advertising that’s in their own ethnic language.

“There are, of course, going to be new brands that they don’t recognize when they come over to Canada and that does present challenges for many advertisers, but that’s not insurmountable,” said Cordery. “One way to get over that is the fact that the Chinese population is more likely to pay attention to advertising in a Chinese language. [Marketing in-language] can help make the message more relevant to the Chinese consumer.”

While they stick to brands they’re familiar with, that’s just a starting point, added Cordery. “The shorter amount of time that Chinese group has been in Canada, the more likely they are likely to stick to familiar brands. But the longer they spend in the country, the less likely they are.”

The study also looked at Chinese and South Asians’ media habits and their different communications preferences.

“Chinese Canadians are much more dependent on in-language advertising compared to South Asians, and that’s very heavily tied to the prevalence of the English language in South Asian countries to start off,” said Cordery.

For Chinese consumers, time spent on digital media is about the same in a Chinese language as in English. For example, they spend 12.6 hours a week on Chinese social media sites and 12.8 hours on social media in English. But more time is spent with Chinese online magazines (7.1 hours) and newspapers (7.1 hours) than in English (6.2 hours for each).

“There’s definitely a significant amount of both Chinese and South Asian consumers who are consuming English media,” said Cordery. “But there’s a huge opportunity to add ethnic language media onto marketing campaigns to get additional reach amongst an audience that is looking for a message that relates directly to them.”

Was this study done using an online survey?