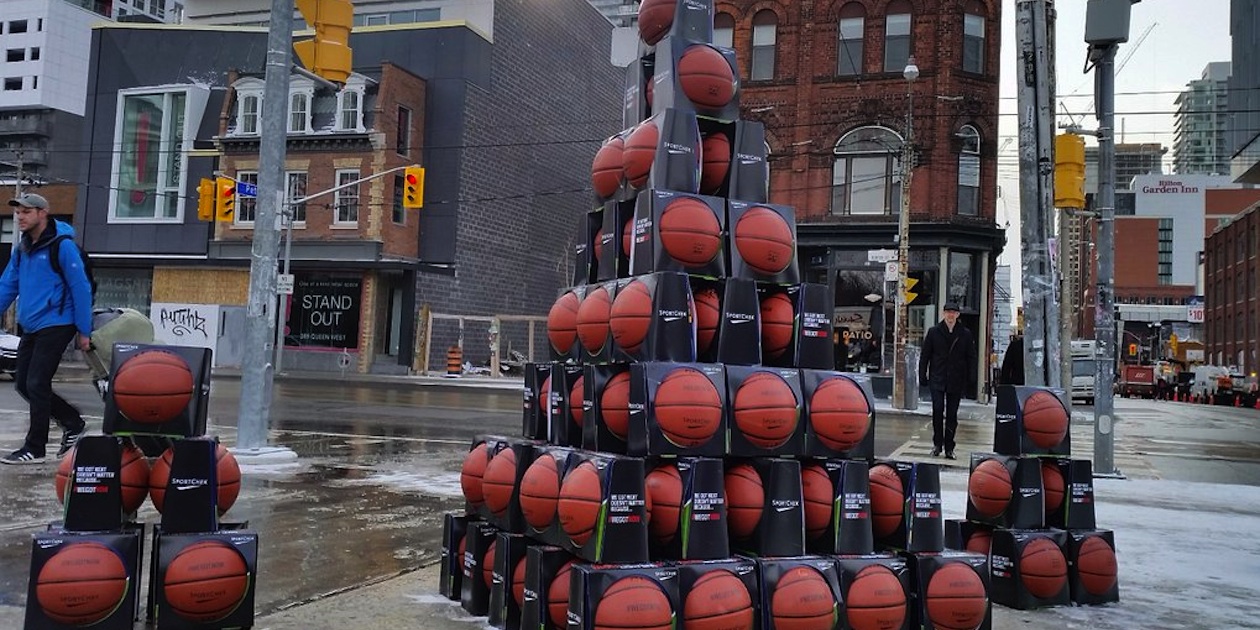 Hundreds of Torontonians woke up to a surprise from Sport Chek earlier this week.

The retailer blanketed the city with 1,891 basketballs set up in pyramids on street corners, basketball courts and in front of notable sports spots like TSN’s studios and Maple Leaf Square.

The stunt, led by North Strategic, served as the kick-off to Sport Chek’s new basketball-themed campaign, #WeGotNow, and came as the city prepared for the NBA All-Star Weekend, which officially began on Thursday. The number of balls included in the stunt was a nod to the year Canadian physical educator, James Naismith, invented the sport.

Frederick Lecoq, senior vice-president of marketing at FGL Sports, said the goal of the initiative was to surprise and delight consumers at street level and encourage word-of-mouth by making people feel like they’re part of the campaign.

“The people who are interacting with this surprising experience, they’re actually the creative,” Lecoq said. “They’re part of the campaign. Anyone who is going to get a ball and pick it up, they’re part of my campaign – which is awesome.”

TBWA\Chiat\Day New York, which started working with the brand late last year, also shot a 60-second spot for the campaign that serves as a basketball anthem reminiscent of the ad that launched the Toronto Raptors’ “We The North” campaign.

#WeGotNow is the second arc of Sport Chek’s #MyNorth platform, which saw the retailer do a deep dive into basketball culture in the Greater Toronto Area. This time around, Sport Chek is taking its message coast-to-coast – #WeGotNow is running nationally via a digital media buy hanlded by Touché.

Sport Chek’s focus on basketball at the national level comes as Canadians’ sports preferences are shifting. While Canada was once seen firmly as hockey territory, Lecoq said Sport Chek’s customers now follow and participate in a diverse cross-section of sports including basketball, soccer and baseball. And, of course, local popularity is dictated by which Canadian cities have a winning team.

Lecoq said sales of basketball-related goods now account for upwards of 5% of overall sales at Sport Chek. As the basketball category grows, the retailer has put more emphasis on the sport in its marketing.

During All-Star weekend, Sport Chek is making its presence in the GTA known with a number of initiatives. After the early morning drop of basketballs around the city, the retailer enlisted basketball GTA expert Elvis Dennis to help it hand out 300 basketballs to local youth teams, the Toronto District School Board and the Boys and Girls Club of Toronto.