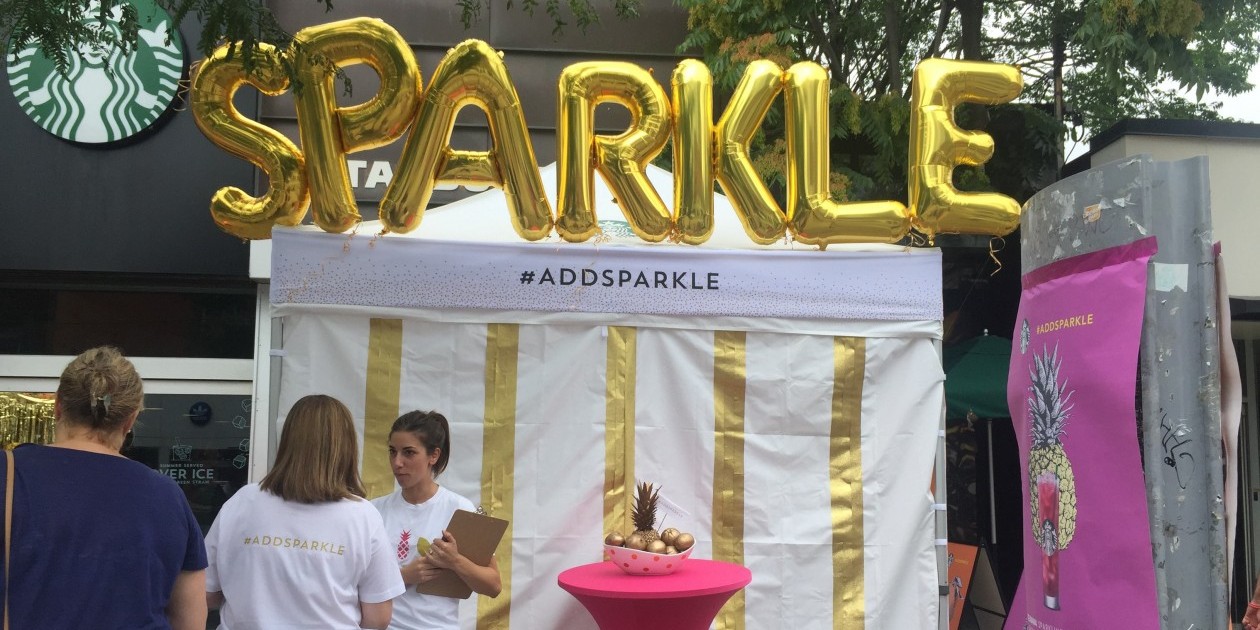 Starbucks Canada celebrated the launch of its carbonated Teavana Sparkling Tea Juice beverages in Toronto last weekend, hosting the second of two “Sparkle Shop” events with YouTube star Lauren Riihimaki (better known known by her username LaurDIY) at one of the brand’s Queen Street West locations. Hundreds of Riihimaki’s fans lined up around the block for hours (some getting there as early as 7:30 am for a noon start time) for a chance to get a signed tumbler and a photo op with the online personality. Organizers say an earlier event in Vancouver drew over 1,000 people. Canada is the first market to start selling the new Sparkling Tea Juice drinks, which launched just two weeks ago. The partnership with LaurDIY, dubbed the #AddSparkle campaign, will extend to her social media feeds, including branded posts on Twitter, Instagram and YouTube. Starbucks Canada has been working closely with Toronto agencies Media Profile, MediaCom and BBDO on the project.

Sara Myers, brand manager for media and content at Starbucks Canada, said the company wanted to tap into the common thread of “customization” between the offerings at Starbucks stores and Riihimaki’s do-it-yourself ethos.

“Carbonation at Starbucks is just the next level of customization,” said Myers. “What Lauren does is very customized and handcrafted. So it was a really nice fit for both of our fans.” To carbonate drinks, Starbucks has begun implementing its proprietary Fizzio technology at in-store locations. The company has differentiated its technology from a SodaStream machine, which injects carbon into a beverage. Instead, the Fizzio shakes a beverage in order to carbonate it. In line with its emphasis on customization, Myers said customers would be able to carbonate beverages beyond the Sparkling Tea Juices.

Carrying on with that theme, LaurDIY fans were invited to the “Sparkle Shop” at Queen West after meeting the online star, where they could decorate their signed tumblers or get outfitted with a sparkly, customized temporary tattoo.