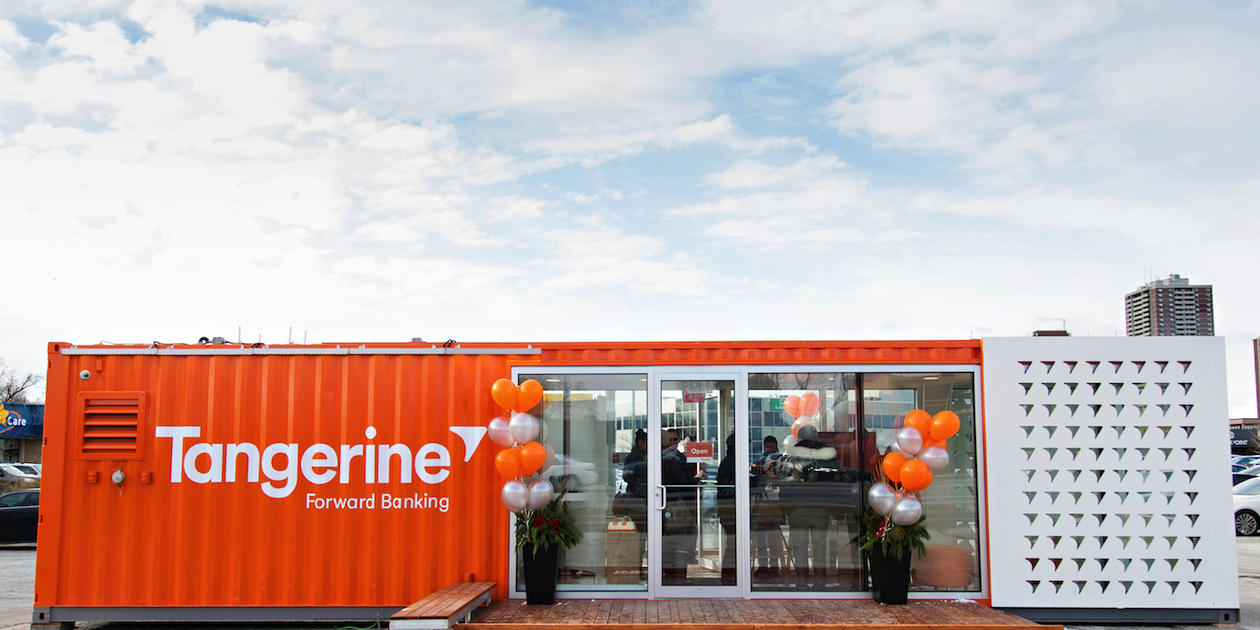 Tangerine has a new approach to brick and mortar. The banking brand has retrofit a shipping container in a bid to acquire new customers.

Since late Dec., the mobile location has been set up outside the Centerpoint Mall in Toronto, Ont. The company is testing the pop-up over a six month period, before potentially rolling out pop-ups across the country.

The location is staffed with customer service agents and equipped with iPads loaded with Tangerine’s “Sign Me Up” app, which allows customers to sign up for an account by scanning their passport or driver’s license. What the pop-up doesn’t offer is tellers – it’s designed to attract new customers, not to be a physical bank. However, in the future Tangerine is considering adding video conferencing as a feature at pop-ups so visitors can talk to its experts about specific financial concerns such as mortgages.

Tangerine, known as ING direct until its rebrand in 2014 (read about that in Marketing’s 2014 Marketer of the Year shortlist profile), has a long history as a direct bank, meaning customers transact via mobile or the web rather than at physical branch locations. It started in Canada in 1997 as a telephone bank, then quickly branched out into internet banking. It has increased its physical footprint by opening five “cafe” locations in Toronto, Montreal, Calgary and Vancouver that serve as “3D billboards” for the brand rather than branch locations. Tangerine’s CMO, Andrew Zimakas, told Marketing the company sees mobile pop-ups as a way to further extend its physical presence and introduce the brand to consumers who would consider direct banking but need a “nudge.”

The bank is also concurrently running direct mail in the area and doing PR and social media to drive traffic to the location.

While he wouldn’t provide numbers, Zimakas said the company has seen a “dramatic uplift” in customer acquisition as a result of the pop-up. He said Tangerine chose a stand-alone location, rather than a pop-up in a mall or at an event, to ensure the data it collected about the location wasn’t clouded by external factors.

In the future, he said the bank will consider other forms of pop-ups as well as new locations for containers, such as sporting events and cultural festivals. If the experiment continues to be successful, he said Tangerine may introduce tens or even hundreds of pop-up locations across the country. In recent years, brands from the Drake General Store to Mark’s, Kraft Dinner and Lands’ End have opted to launch pop-ups rather than open permanent locations. While many have used them to introduce a new brand to a market or launch a product, Zimakas said he sees potential for pop-ups to become a long term part of the Tangerine brand and a way to differentiate it from competitors.

“We’re focused on being different from the big banks. We think this is very much in line with a differentiated retail mindset,” he said. “Fundamentally we view ourselves as innovative retailers that happen to be in banking and I think pop-ups really support that approach.”

“They’re an interesting and unique way of showcasing a brand. That fits really well with Tangerine.”