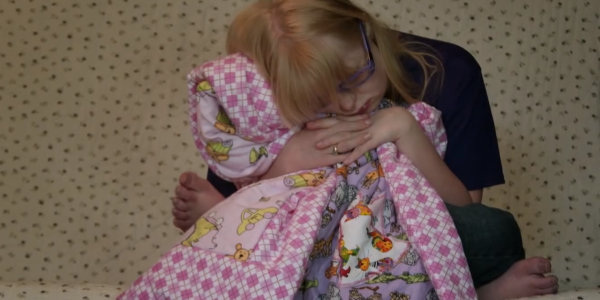 Telus helps Canadians give back to their communities

Telus launched its annual “Give Where We Live” campaign on social media July 15 with a YouTube video about Hugginz by Angel, a charity run by an 18-year-old Vancouver Island native.

Telus found out about Angel, who sews blankets and pyjamas for sick children in hospitals, during its ninth “Day of Giving” campaign this year, which asked Canadians to share how they give back to their communities. Each story would have a chance to have Telus donate $50,000 to its cause. Telus shot a video in which they give Angel a new sewing studio to help her do her work.

“You can’t say no, you can’t say no,” says Angel’s mother during the video, describing how compelling her daughter’s drive is to help others. The video was shared 15,000 times in less than a week with the #givewherewelive tag when Telus pledged to donate an extra dollar for every new share, said the telecom. A Facebook post of the video earned 6,000 comments alone, said Jill Schnarr, Telus vice-president of community affairs.

“Verbatim, people said, ‘This is why I’m with Telus, because you support causes like Angel’s,’” said Schnarr. “‘This is why when my contract with Bell is up, I will move over to Telus.’”

The learnings that led to the latest “Give Where We Live” campaign are simple.

“Customers are telling us, ‘What you do is important to me,’” said Laura Hearn, senior marketing communications manager at Telus. “We survey thousands of customers across Canada. We ask, ‘Are you much more likely to continue using Telus because of involvement in the community?’ In 2011, 15% said ‘yes.’ Next year, it was 35%. In 2013, it went up to 51%.”

Telus’ large number of followers across social media platforms is thanks, in part, to a big corporate responsibility push that has strongly identified the brand with causes.

That began in a big way with its successful “Go Pink” campaign in 2010, which invited people to turn their profile pictures pink as Telus raised money for new mammography equipment upgrades across the country. The cause proved so popular that Telus’s Facebook page went from 30,000 likes to more than 500,000 in just a month.

“We’re trying to engage the younger demographic in our brand,” said Hearn. “Any time we run a community investment campaign online, we generally get more traffic than any regular marketing campaign.”

The firm puts its money where its mouth is, though, and that seems to resonate as authentic.

“Last year we donated over $46 million to non-profits and charities across Canada,” said Schnarr. “Giving is a focus of our DNA. We are always looking for opportunities to hear about how other people are giving back in their communities and making a difference.”