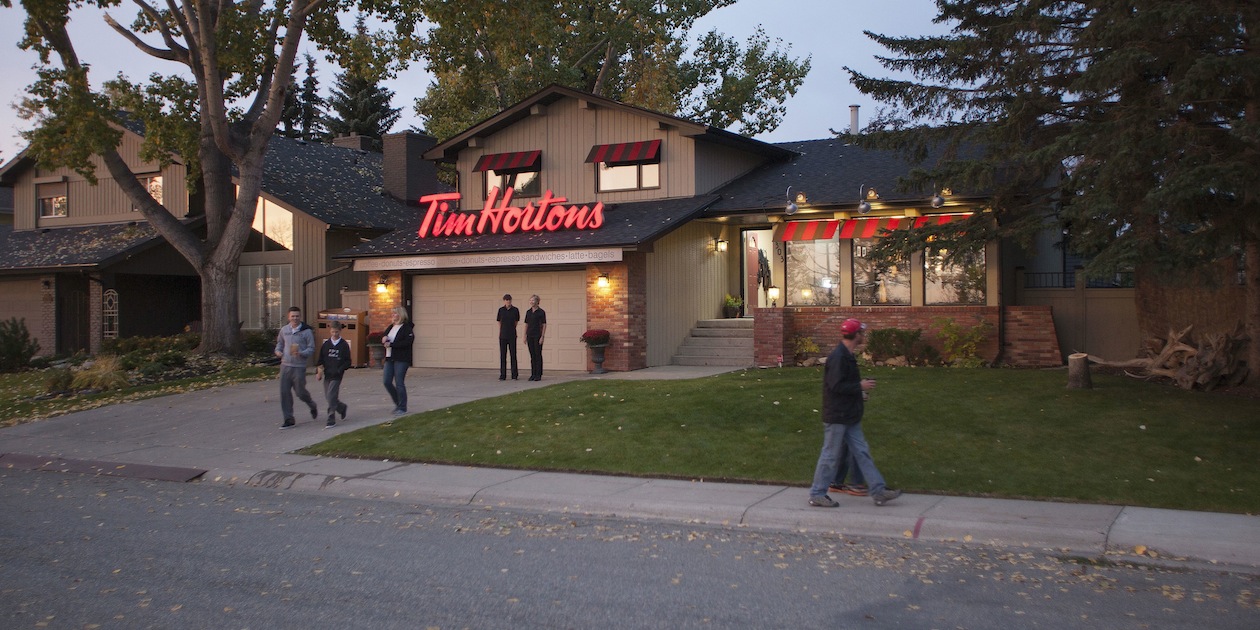 Tim Hortons turns a suburban home into a store

The brand's latest stunt promotes its hiring efforts, shows it's a friendly neighbour

Tim Hortons seems to have a thing for transformations.

The brand garnered massive attention this summer for turning one of its stores into a horror-film-style experiment in support its new dark blend coffee. On Tuesday Tim Hortons revealed another metamorphic stunt when consumers in a suburb of Calgary, Alta. awoke to find they had a new neighbour.

With the help of Taxi Canada, the brand company transformed a residential home into a Tim Hortons store complete with a counter, staff, lit sign and awnings in branded maroon and tan. It even created a “walk-thru” in lieu of its typical drive-through.

It was all part of an effort to promote Tim Horton’s hiring efforts and attempt to be seen as a genuine part of the neighbourhoods its locations serve.

The company has plans to hire 5,000 store employee across Canada and is using the stunt as a spring board for its recruitment campaign, which began in August and also includes localized efforts like newspaper ads in local papers near store locations. Taxi Canada is Tim Hortons’ agency of record for its employment and recruitment business and will handle all of the creative for the campaign.

Tweets showing off the transformed home linked to WorkAtTims.com, a site dedicated to attracting new employees.

While the stunt was billed as a surprise, it had been in the works for months, according to Doug Gunn, Tim Hortons director of marketing in Western Canada.

Gunn said the brand went on an extensive hunt for the perfect home – an idyllic, typical suburban home that could sub in for any home in any suburb in Canada.

Once they found a rental that would work and fit the brand’s colour scheme, it got to work transforming it into a store. The day of the reveal, the brand also sent out a team on a “surprise and delight” mission, finding consumers to give free product to. For example, Gunn said the team handed out water bottles to consumers playing tennis in the neighbourhood and delivered tea to women getting their nails done in a salon near the home.

Throughout the day, the brand also had a film crew in tow getting footage for a video documenting the stunt.

Gunn said the idea of “Tims Next Door” was to show that its stores are easy to get to and often walkable from potentially employees’ homes. The brand also wanted to project the idea that Tim Hortons is a good neighbour. “We’re not just neighbourly, we’re your [actual] neighbours,” he said.

In the past, much of Tim Hortons advertising has focused on Canadiana, whether it be a new Canadian’s first trip to Tim Hortons or a hockey inspired story. Projects like “Tims Next Door” and “Tims Dark” mark a change in course for the brand as it shows a more flexible, forward-thinking approach to marketing.

That doesn’t mean the brand is abandoning its country-loving image any time soon, though, according to Gunn. He said the newer initiatives, which focus on experiential, online video and social media, run in parallel with the brand’s more traditional programs, like Timbits Hockey and its recent Smile Cookie charity program.

What the brand is doing, Gunn said, is making an effort to be bolder in its advertising choices. “That doesn’t mean we’ll change who we are, what it means is that we’ll think outside the box and move forward,” he said. “You need to be different, bold and daring – that’s where you’ll see this experimental advertising that’s running in parallel [with more traditional efforts].”

“That’s where we need to take the brand in the next 50 years,” he said.

The stunt follows up on a YouTube video released last month which also focuses on the idea of Tim Hortons as “your neighbhour.”