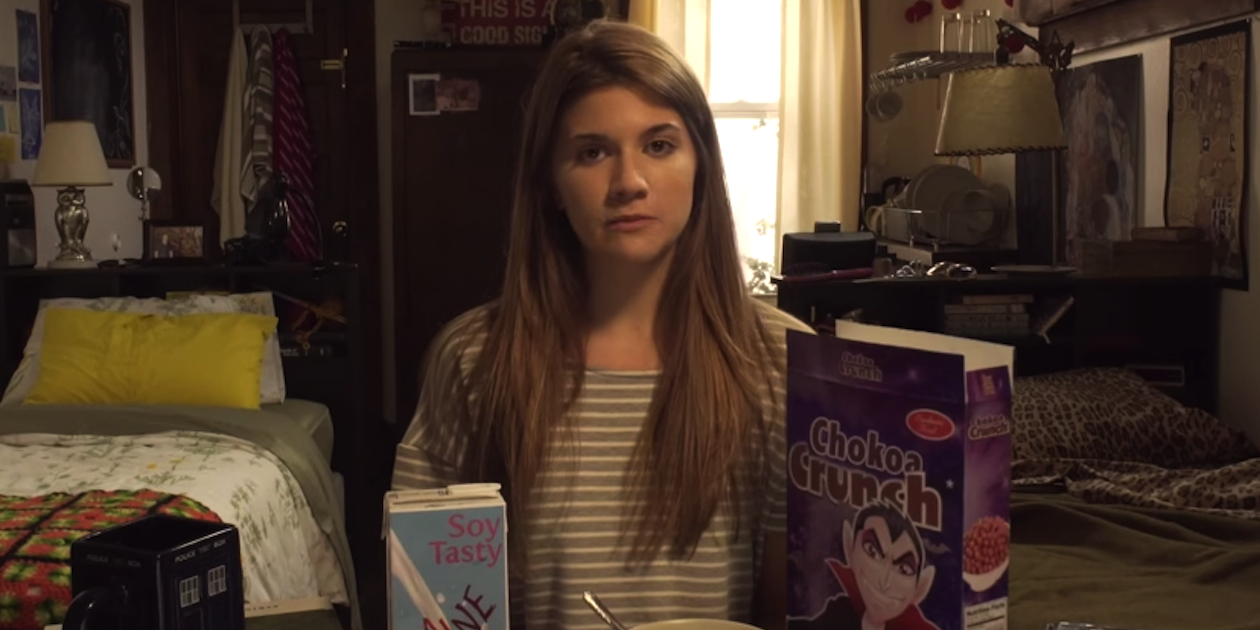 U By Kotex sinks its teeth into vampire web series

Now at its mid-way point, the series has amassed more than 1.2 million views

U By Kotex isn’t afraid of a little blood.

In fact, far from shying away from its association with blood, the Kimberly-Clark-owned feminine care brand has embraced the link by executive producing a web series about a female vampire.

Called Carmilla, the series first debuted in August on the Vervegirl TV YouTube channel and follows the story of a university co-ed and her vampire dorm mate. The show is based on the 1872 story about a vampire of the same name, written a quarter century before Bram Stoker’s Dracula became the most famous vampire in fiction.

Denise Darroch, brand manager for feminine care products at Kimberly-Clark was drawn to the series because of its strong female character and roots in history.

She said the brand never second guessed the subject matter and had no qualms about linking women’s periods to vampires. “U By Kotex is a brand that talks about the truth,” she said. “Our videos talk about the normalcy of periods. We’re pretty blunt about it. We don’t shy away from it.”

The first branded episode in the series, released last week, is a perfect example of that attitude. In it, the vampire character Carmilla answers questions bluntly about her period.

Kaaren Whitney-Vernon, CEO of Shift2, the agency behind the series, said the spot is in reference to a long-running debate the creators had seen on vampire fan boards — whether female vampires get their periods.

It’s one of three branded videos that have been released so far. The other two are a satirical game shows about feminine hygiene and a PSA two of the show’s characters create for the health services department of their fictional university.

More than 20 episodes of the twice-weekly series had been uploaded before the U By Kotex videos were released. At first the series made no mention of U By Kotex at all, though the brand signed on back in February during pre-production.

Darroch said the brand wanted the series to gain traction and develop a fan base before the reveal because it needed consumers to be familiar with the characters for the brand-sell to work.

When U By Kotex came on board, the script was finished, but as executive producer, it was given approval and had a strong presence on set. However, Darroch said the notes the brand gave were minimal and that the goal wasn’t to integrate the brand into the entire series. Instead, she said, the brand ensured the show was a good fit for the tone of U By Kotex and focused the brand integration on the five promotional videos.

Darroch explained the idea of sponsoring Carmilla was brought to her team by its brand activation agency, Geometry Global. The brand had been looking for new ideas within the social ecosystem, so when the agency learned about Carmilla from Shift2, it thought the project may be a fit.

The series is now at its mid-way point, with two more branded videos set to launch. The 24 episodes to date have amassed more than 1.2 million views, while the first episode alone has 200,000.

The branded videos, which serve as asides to the narrative and are not officially numbered episodes, are also doing well. Each has more than 15,000 views. The first branded video –“Do Vampires Get Their Periods?” — is up to 29,000 views, which Darroch said is entirely organic. While the brand has paid media set aside to promote the videos towards the end of the season, she said the current tally is entirely from Carmilla fans.

According to U By Kotex, the viewership is 91% female, while three quarters of the viewership is 18-34, a major targeting coup it would have struggled to reach even with female-skewing lifestyle channels on TV.

The series has been successful in achieving the brand’s goal, according to Darroch. She said U By Kotex was looking to connect with fans over a prolonged period, rather than a hit TV spot or one-off viral video.

The series is part of the brand’s larger “Save The Undies” campaign, which includes print, TV spots, social media and other forms of digital marketing.