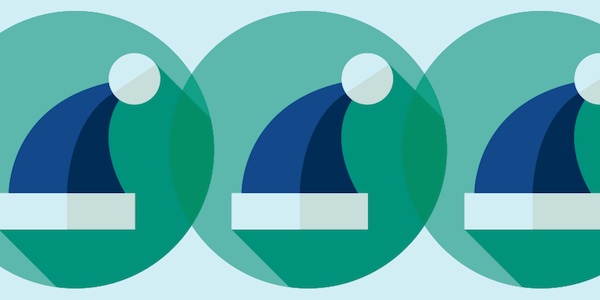 Feel-good campaign is the airline's 'Christmas Miracle' initiative to date

Starting early Wednesday morning, the airline will spread holiday cheer coast-to-coast with its 2015 “Christmas Miracle” campaign, which will see every single WestJet employee do a good deed in their community.

The 24-hour initiative serves as a launching pad to the brand’s annual holiday campaign; an integrated initiative rounded out by a full mix of marketing activities including video ads, experiential activations, PR and social media.

The WestJetters’ good deeds run the gamut from small gestures like buying a coffee for a stranger to larger plans like caroling at retirement homes. The company supporting the rush of festive behaviour with a dedicated budget for each of its regions, allowing employees to decide locally how they could make a difference this year.

Greg Plata, team lead for sponsorship and experiential marketing at WestJet, said the aim of this year’s campaign is to turn its workers into a force for good that extends the positive sentiment the company’s established with its prior “Christmas Miracle” ads.

“We always have WestJetters reaching out and wondering how they can get involved – they always want to be part of next year’s ‘Miracle,'” Plata said. “We’re going all in. We trust our people to make these decisions. They do it every day in our airports. The only difference is now we’re giving them a platform to stand on.”

“This is an opportunity for them to stand proud and show our guests and the world our caring culture and the reach we have outside of the airport.”

With the help of Studio M, the brand is currently filming an ad that will tell a story about how WestJet helped improve the holidays for a handful of consumers this year. The airline is planning to release the spot next week.

Almost every customer traveling on WestJet Wednesday will see some element of the campaign. The company will have street teams in 12 markets and is doing a series of “random acts of kindness,” like paying for tourists’ entry at the CN Tower. WestJet is also giving away free flights throughout the day and offering free horse carriage rides in Quebec City and New York. 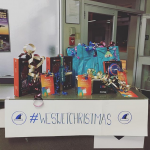 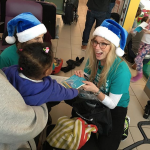 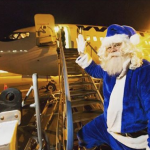 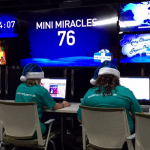 One of the other key experiential elements of the campaign is a cross-country tour by the WestJet “Blue Santa” character featured in its “Christmas Miracle” ads. The tour started early Wednesday morning in Halifax and will be making stops in Toronto, Calgary, Yellowknife and Vancouver.

Along the way WestJet’s Santa will be making stops at TV talk shows. On the PR front, WestJet and its agency Mosaic, are also doing drops at radio stations, gifting hosts presents selected for them based on topics they’ve been discussing in recent weeks.

Throughout the day, WestJet and its agencies will be tracking all the campaign activities from a war room at the brand’s headquarters in Calgary and doing social listening to look for opportunities for on-the-fly good deeds. In the spirit of Santa Claus, Plata said the company would be “making a list and checking it twice,” with the goal of completing all 12,000 good deeds by the end of the day.

This year marks WestJet’s fourth annual holiday campaign. Since 2012, when WestJet released its “Christmas Flash Mob” video, the brand has become known for its feel-good holiday films. In past years it surprised flyers in real-time with gifts they wished for and flew to the Dominican Republic to offer gifts and supplies to locals in Nuevo Renacer.

Media Experts is handling the media buy for the campaign.