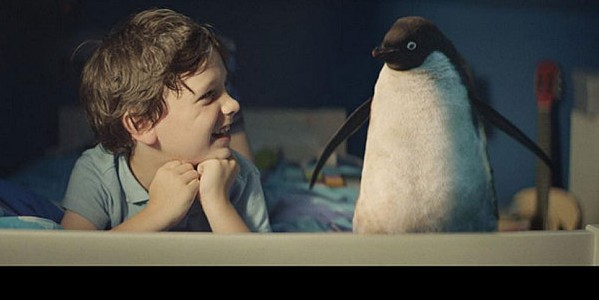 Cannes 2016: Monty the Penguin was cute and it worked

He had a book, a pop-up shop, his own Twitter feed, lines of clothing and plush toys, now Monty the Penguin has a Creative Effectiveness Grand Prix Lion.

The loveable character from John Lewis’ 2014 Christmas advert warmed the hearts of consumers from across the globe and, most importantly for this particular competition, helped boost the British retailer’s bottom line.

Created by the Festival to recognize the exceptional work that drives business results, the Creative Effectiveness Lions is only open to work that either shortlisted or won in Cannes Lions 2013-2015. Last year, for instance, “Monty’s Christmas” took home a Grand Prix in the Film Craft competition.

During a press conference in Cannes Tuesday morning announcing the winners, Creative Effectiveness chair Andrew Robertson, CEO of BBDO worldwide, said every case study “was presumed to be guilty until proven—and proven beyond all reasonable doubt—that it was innocent.”

“We were looking for real impact or effect. Phrases like ‘we achieved the trending trifecta of Facebook, YouTube and Twitter’ and ‘this was the most Shazamed ad of all time,’ cut no mustard with our jury,” he said. “We were looking for proof, real proof, not just sales effect but, if you were to win a gold, profit effect.”

“What we were looking for was advertising that worked brilliantly, that had a massive effect and where it was able to be proved beyond all doubt that effect was attributable to the advertising,” he said.

Living across multiple platforms, the campaign from Adam&Eve DDB London told the story of a plush penguin named Monty and the little boy, Sam, who owns him and brings him to life through his vivid imagination.

Aside from its success online (more than 32 million views on YouTube and Facebook, more than 165,000 shares on Facebook) Robertson said the campaign “contributed to revenue growth of £132 million, incremental profit growth of £33 million  and a profit ROI of 8%.

“And if that isn’t what creative effectiveness is all about, I’m not sure what is.”

“It was creatively brilliant obviously, but the results, the paper was so well written… beyond any doubt they definitely proved the link between the advertising and the business impact and the impact was significant,” she said. “It wasn’t a tiny incremental boost, it was massive.”

Though Johnston had a great deal of admiration for the creativeness of the campaign, she said the business cases were stronger for the work that went on to medal.

According to the case study prepared for the Canadian awards show The Cassies, where it won a Grand Prix, #LikeAGirl grew brand share 1.4 points to 59.6% and increased top-of-mind awareness by six points to 83%.