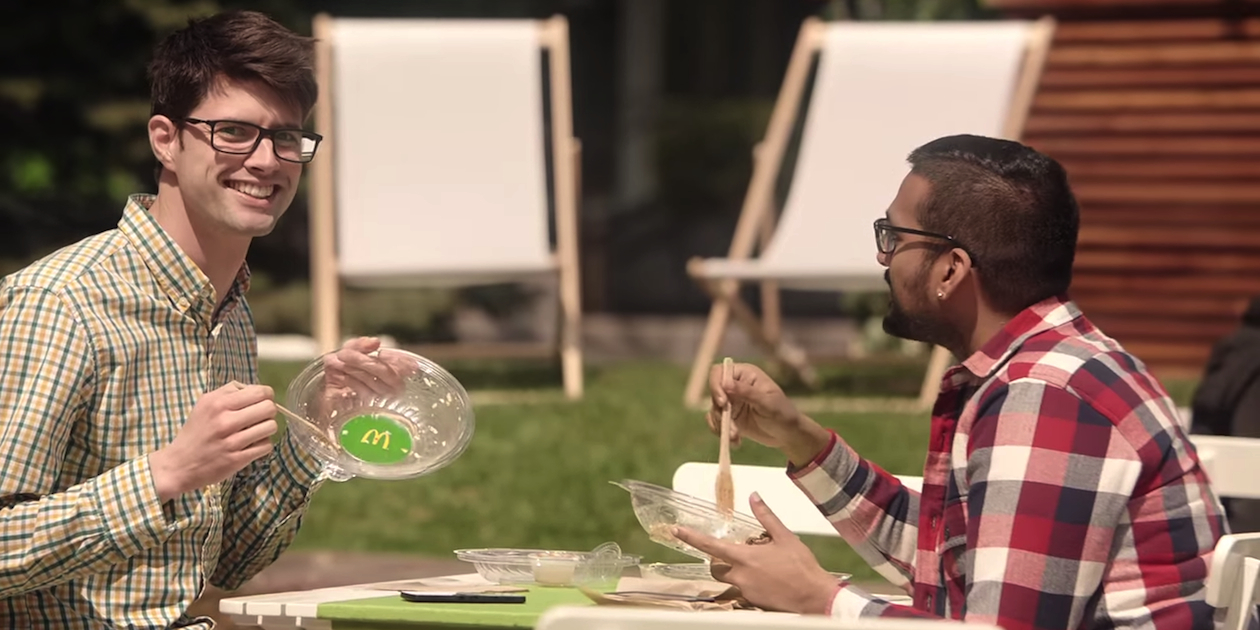 The Salad Society appeared to be the latest in a line of hip and health-conscious fast-casual restaurants like Freshii, Salad Days and Fresh that have gained popularity in Toronto and other major Canadian cities in recent years.

But those who stood in line for a free salad at the pop-up discovered a surprise at the bottom of their bowl: a golden arch. The salads were not from some new upstart restaurant. They’re the newest menu items at McDonald’s.

The chain recently added three new salads with ingredients like crunchy roasted pumpkin seeds, baby kale, couscous and feta cheese. Knowing consumers see McDonald’s as a burger chain rather than a destination for healthy, fresh food like salad, the brand and its agency, Tribal DDB, came up with The Salad Society concept as a way to get consumers to blind test the new offering.

“For us it was all about changing perceptions,” said Solange Bernard, senior manager of advertising and media at McDonald’s Canada. “We know there’s some skepticism about McDonald’s ability to introduce amazing salads with fresh ingredients, so this is our attempt to turn those notions on their head.”

“We wanted to create an event that allowed us to put our fresh ingredients right in front of the consumer and allow them to sample and try our salads without any pre-conceived notions and really change those perceptions.”

The announcement earlier this month that McDonald’s would be adding kale to its menu became a massive news story, prompting everything from mockery to debate over whether the brand could ‘conquer’ the trendy vegetable (not to mention those who reminded the company it had just mocked kale in one of its own advertisements.)

Salad Society is McDonald’s Canada’s way of side-stepping those conversations as it adapts to changes in consumer taste. While salads are nothing new for the restaurant, Bernard said the new ingredients were chosen for their current popularity and is one of the ways McDonald’s is attempting to stay relevant.

The salads themselves were developed by four Canadian chefs based on a series of focus groups and taste testing. McDonald’s plans to keep on two of the three salads as permanent menu items, with the least popular ending its menu run at the end of the summer.

In Toronto, the brand has partnered the Salad Days pop-up with four weeks of free salad deliveries from the bicycle delivery service Hurrier. It also created branded gift cards as The Salad Society “membership” cards.

The stunt was filmed for a spot that debuted on broadcast May 12. A longer, 50-second digital version of the ad is currently running as pre-roll on YouTube and other sites.

OMD handled the media buy, which is focused on digital and TV. On broadcast, it will run on both conventional and specialty, including spots on wide-reaching shows like The Big Bang Theory, The Blacklist, Under The Dome and Big Brother. The campaign will run in heavy rotation for four weeks on broadcast, with an additional four weeks at lower frequency.