You used to call him on his cellphone, but Drake is now reaching millions of people with his billboards.

There was no sophomore slump for the second iteration of Drake’s Toronto billboard campaign promoting his upcoming release Views From the 6, according to a new report published by Clear Channel Canada.

While the previous campaign relied on just one strategically placed – and cryptic – billboard that has been dubbed “the most viral billboard in history,” the latest campaign utilized the full array of Clear Channel assets including banners, posters and superboards. The creative was rolled out in stages to ensure maximum consumer interest.

The campaign was built around February’s NBA All-Star Game in Toronto, the first to take place outside the U.S. Already the city’s pre-eminent musical and cultural ambassador, Drake was also named coach of the Canadian team in the event’s annual celebrity game.

With Views From the 6 reportedly set for release sometime in April, the hip-hop star used the marquee event – which attracts celebrities and star athletes as well as thousands of fans – to amplify the buzz for the upcoming release while simultaneously promoting his city, which he has dubbed “The 6.” 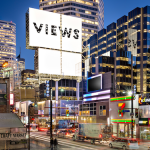 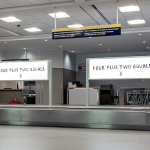 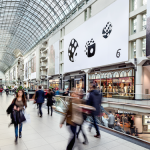 The out-of-home ads played off both the album title and the city’s nickname. A giant banner in the Eaton Centre mall, for example, featured three dice showing the numbers four, five and six, while the numeral six was located in the bottom corner.

Another giant board on Clear Channel’s Atrium on Bay Media Tower featured the word “Views” against a white background, while other boards featured the message “Four plus two equals” with the number “6” at the bottom.

According to campaign analysis conducted for Clear Channel by Sysomos, online conversations about the billboards generated a total of 5,260 mentions – 68% of them from male users – that were eventually amplified to an estimated 127.2 million impressions.

A tweet by user @Bluntiq reading “Billboards spotted in Toronto hints (sic) at April 2 Release for Drake’s album” was the most re-tweeted, being reposted 212 times. With 350 mentions, “#ViewsFromThe6” was the most-used Twitter hashtag during the covered period, followed by #vft6 (158), #drake (138) and #toronto (138).

Another spike occurred at 3 p.m., when the Twitter handle @HotNewHipHop tweeted “#OVOSZN is approaching… Drake has started to put up #ViewsFromThe6 billboards in Toronto.”

The billboards scored 5% positive and 2% negative sentiment, with neutral mentions accounting for 93% of the general sentiment.