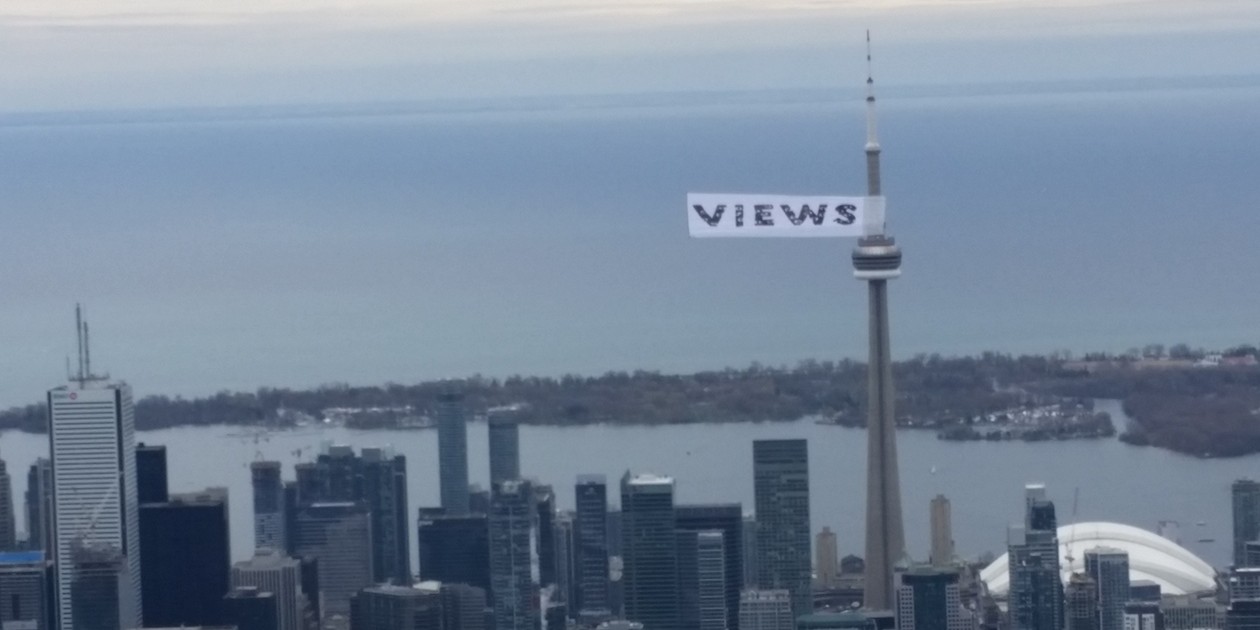 The 6 God ascended into the skies above Toronto last week.

As part of a massive promotion for Drake’s new album Views that included a coordinated billboard campaign and a pop-up shop on the eve of its release, Universal Music also partnered with Toronto-based Wild on Media on an aerial banner.

A fixed-wing aircraft towed a 2,500 square-foot banner bearing the word “Views” for approximately two hours on Friday; its flight path extended from Lake Ontario north to Bloor St. and east-west between the Don Valley Parkway and Bathurst St.

Wild on Media, which specializes in non-traditional out-of-home formats, has been offering aerial banners for roughly 10 years, though president George Christidis said the format isn’t as popular as it is in the U.S., where companies regularly fly banners over major cities (insurance company Geico, for example, is said to fly banners over 50 American cities each day).

“There’s an awareness among the advertising community there because they see them,” said Christidis. “Here that’s not the case, and we obviously want to change that. It’s just a question of conveying [the value of] this particular medium to advertisers.”

Aerial banners represent a small part of Wild on Media’s total business, which also includes digital advertising trucks (a cube truck with audio-enabled LED screens on the back and sides), wall projections and walking billboards.

The company typically flies 1-2 banners each year, said Christidis, with previous clients including a Calgary Lexus dealership, 20th Century Fox, BMO and Global Television. Those banners ranged in size from 5,000 square-feet to 10,000 square-feet, requiring them to be pulled by helicopter because a light airplane would not be able to overcome the drag they create.

Christidis did not disclose a cost for the Drake campaign, but said production costs for aerial banners typically run about $6 per square foot, with additional flight costs of between $4,000 and $6,000.

He couldn’t predict how many impressions the Views banner garnered, but said a banner had the ability to reach between 60-70% of a city’s population when used for several hours.

The Views banner was printed on individual canvas panels at the California facility of Wild on Media’s partner AirAds USA, and then sewn together at Burlington Executive Airport prior to take-off.

Aerial advertising of this type dates back to the 1950s, though the process of getting a banner into the air has remained virtually unchanged in more than 60 years.

The banner is affixed to a so-called “mastpole” with a weighted base and a bridle that attaches to a long rope. The whole assembly, which weighs only about 60-70 lbs., is then laid out on grass alongside the runway.

The pilot attaches a long cable ending in a grappling hook to a special clip near the tail of the plane. The hook end is stowed inside the plane until after take-off, when the pilot heaves it out of the window before swooping down to within 10-20 feet of the ground to snag the banner. Once the banner is successfully snagged, the pilot immediately throttles up and directs the plane skyward.

At the end of the flight, the pilot releases a catch on the towrope and drops the whole assembly into a field, where it is retrieved by a ground crew.

Not surprisingly, things can go wrong. In two separate incidents in 2014, for example, a 4,000 square-foot banner fell off a plane and blanketed a home in San Jose, while a pilot towing a banner crashed into a home in Colorado.

Views reportedly sold more than 822,000 units in the U.S. and 88,000 in Canada in the three days following its April 29 debut, topping the Beyonce’s Lemonade. It also garnered more than 133 million song streams.

Universal Music has also been promoting the album with a commercial running during Toronto Raptors playoff games.