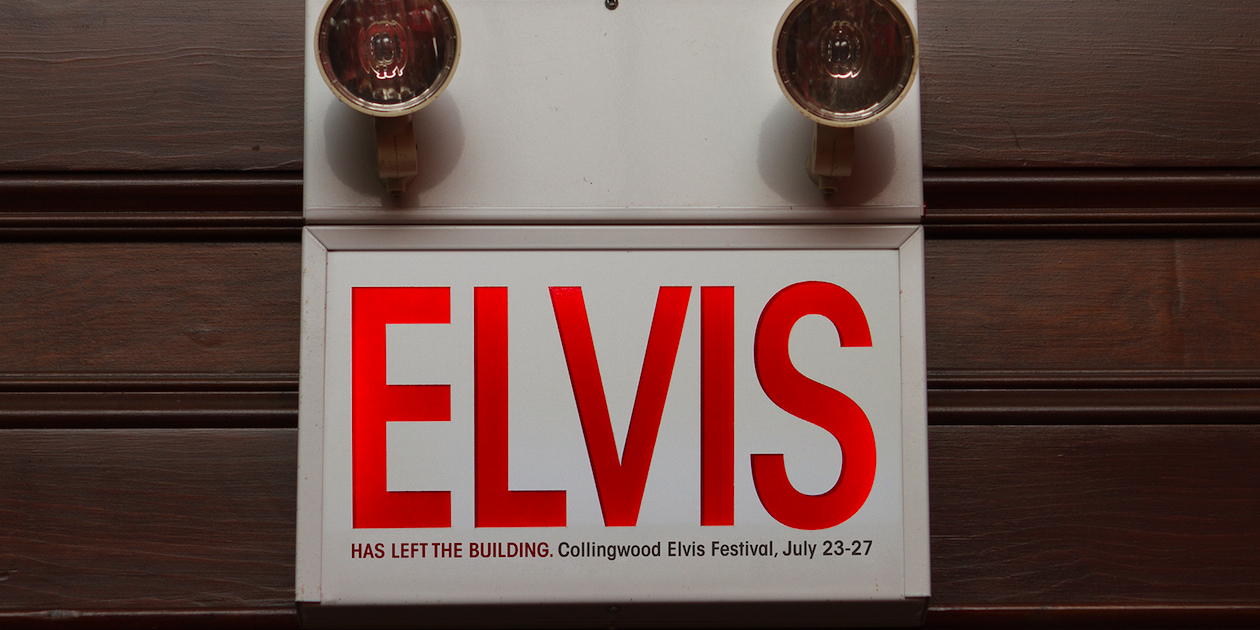 Elvis has entered some buildings.

To promote the annual Collingwood Elvis Festival, Toronto agency Zulu Alpha Kilo (ZAK) has created a new campaign built around some of the most iconic Presley images, from blue suede shoes and hound dogs to oversize – and wildly ornate – sunglasses.

The campaign is comprised of wild postings and ambient installations including an “Elvis” sign that resembles a traditional “Exit” sign, complete with the obligatory “Elvis has left the building” message (ZAK is purportedly looking at mass-producing the signs), and an outdoor vinyl wrap featuring the iconic image from his 50,000,000 Elvis Fans Can’t Be Wrong album cover, accompanied by an actual gold microphone stand.

Newspaper ads and a social media campaign giving consumers the opportunity to win one of the Elvis exit signs complement the out-of-home elements.

“Who wouldn’t want an opportunity to do something with Elvis?” said ZAK president Mike Sutton of the campaign, which broke last week and runs through Sunday.

It is the first time ZAK has worked with the Collingwood Elvis Festival, which celebrates its 20th anniversary in 2014.

Campaign elements largely eschew imagery from The King’s “jumpsuit years” of the mid-70s, focusing instead on his mid-50s and 60s heyday. Elvis Presley Enterprises, which oversees licensing for Presley’s estate, had final approval on all creative executions.

“Elvis has his good years and some not-so-great years,” said Sutton. “We did explore trying to find some creative ideas from his later years; those were the ideas that didn’t make the cut.

“They obviously have a brand to manage in Elvis Presley,” he added, noting that the fact that Elvis’s former wife Priscilla Presley is attending this year’s festival added an additional layer of scrutiny to the creative process. “They didn’t impede the process but they did have to approve everything.”

Other creative elements include door hangers that look like a vinyl record bearing the words “Heartbreak Hotel.” They were placed throughout several major hotels in Collingwood and the surrounding area last weekend.

ZAK also partnered with several boutique shoe stores and opticians to create a pair of ambient installations, placing a pair of blue suede shoes accompanied by the message “The world’s largest Elvis celebration,” and a group of aviator glasses accompanied by the message “Look the part.” Both executions feature the festival date and a link to CollingwoodElvisFestival.com.