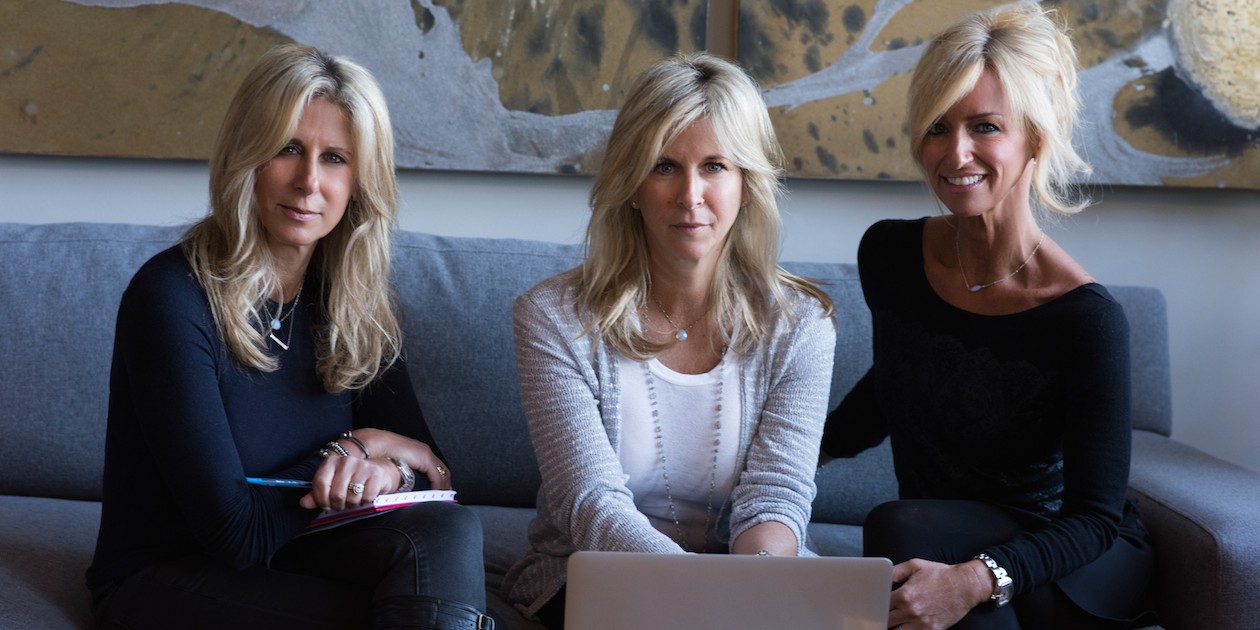 Weddings are a $5 billion industry in Canada, according to the Wedding Planners Institute of Canada, but a group of Toronto women have created a business for when “‘Til death do us part” becomes “Drop dead.”

Divorce Angels is on online resource that connects want-to-be divorcees with approximately 150 businesses covering a wide range of industries – from what founding partner Marni Sky (top right) called the “practical” elements of divorce such as lawyers, mediators and accountants, to more emotional services such as matchmakers, makeover specialists and therapists.

“We are a one-stop shop for everything,” said Sky, a career marketer who launched Divorce Angels with sisters Shari Wagman (top left) and Mara Marcello last year. “We really looked at it from a holistic perspective, thinking through not just the practical piece, but also the emotional piece, getting you back on your feet again and moving forward with your life.”

Sky’s career has included account management stints with both Cossette and Y&R, as well as client-side with American Express and the Toronto International Film Festival, while Wagman was a PR practitioner with Goodman Communications before embarking on a career in real estate.

While Statistics Canada stopped tracking marriage and divorce statistics in 2011, the most recent data said more than 40% of Canadian marriages (43.1%) will likely end in divorce before a couple reaches their 50th anniversary, up from 39.3% a decade earlier. There were just over 70,000 divorces in Canada in 2008.And while it isn’t as widely celebrated as the wedding industry, divorce is a big business in North America. The 2014 documentary Divorce Corp., for example, pegged the value of the U.S. divorce industry at $50 billion.

“When there’s a split it’s almost like a wedding, because one person has to move out and needs couches and a new set of dishes,” explained Wagman. “It’s a very lucrative and expensive industry.”

While none of the Divorce Angels founders have been through a divorce, all three have friends or family whose marriages have broken up. Seeing their struggles to navigate the unpleasant task of divorce was the impetus behind Divorce Angels.

“What was unanimous amongst all of them was that when they woke up at 2 a.m. and they were feeling panicked or overwhelmed or stressed, there was not one place online where they could get all the information about divorce,” said Marcello. “All they got was Government of Canada websites.”

Online searches for specialists such as family lawyers and therapists produced what Marcello described as a “laundry list” of options, but no guidance as to which to select or how to proceed. “There was nowhere they could read what other people had gone through, no community…they felt so alone,” she said.

The service is free for consumers, while participating businesses – all of which are rigorously vetted by the three Divorce Angels partners – pay a listing fee based on their revenue potential. Lawyers are at the high end of scale at $3,000 a year, with gyms and trainers paying approximately $200.

In addition to the listing, each business also gets an “Angels Endorsement” that explains why it was selected by Divorce Angels. “To the person reading it, it’s like your girlfriends telling you why they would go to that lawyer,” said Wagman. “Every [lawyer] has a different personality – some might be a shark, some might be more hand-holding.”

Divorce Angels allows a maximum of four vendors in each category, with Sky explaining that the number is meant to provide users with choice, but not overwhelm them (a Google search for “Toronto divorce lawyers,” for example, produces 347,000 results).

The trio launched a beta version of the site in Toronto about a year ago, promoting it via their personal Facebook pages, and were overwhelmed by the response. “We got a crazy amount of interest, both from professionals asking us if they could market on it, to consumers asking if they could use the service,” said Sky.

The site has attracted about 40,000 people in the Greater Toronto Area since going live on Oct. 19, about 25,000 of which have arrived since a Jan. 4 PR blitz timed to coincide with what has been dubbed “Divorce Day,” when unhappy partners resolve to make changes to their life.

The site’s user base skews approximately 60% female, which the founders attribute to a digital marketing campaign on Facebook and other female-focused sites, but is being promoted to both genders.

“We really believe our service offers information for both genders,” said Sky. “We have services that are stereotypically geared towards men, like nanny services, nutritionists and people that come to your house to cook.”

The family lawyers, mediators and financial advisors categories are the most highly trafficked parts of the site, though Sky said there had been “huge spikes” in the sections related to therapists and coaches of various types. Matchmakers are also in-demand as people look to move on after their divorce.

Divorce Angels is currently running a pair of radio spots on its social channels and Toronto radio stations such as 680 News. The spots, “So Happy” and “Popping the Question,” focus on the happiness divorce can bring.

“Popping the Question” opens with what seems like a marriage proposal, a man telling his female counterpart that they’ve been together for a while, while the woman gleefully exclaims “Is this what I think it is?” before the man asks if she will grant him a divorce. “I thought you’d never ask,” she responds.

Both spots feature the slogan “All the resources for happy divorces” and direct listeners to the DivorceAngels.ca website. The company is supporting the spots with PR efforts from Brown & Cohen and a SEO and digital display campaign directed by Toronto agency Hooplah.

Sky said the goal was to expand the service into other markets within six-to-12 months, starting with Canada before eventually moving into key U.S. markets such as New York and Los Angeles.