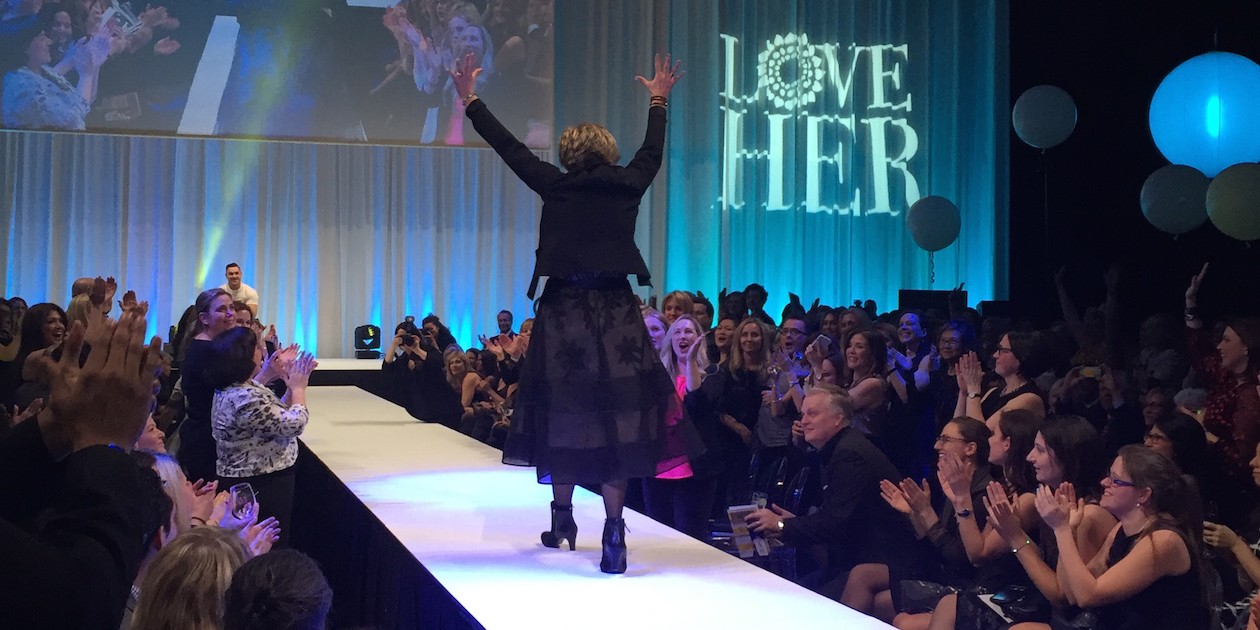 Lauren Richards puts her ‘ladyballs’ on the line

Lauren Richards has been a daughter, granddaughter, wife, mother, media executive and entrepreneur. She can now add cancer survivor (an expression she dislikes, by the way) to the list.

On Thursday, at CBC Studio 40 in Toronto, Richards was named the 2016 recipient of Ovarian Cancer Canada’s Virginia Green Award at the organization’s annual LOVE HER fashion gala.

The event is built around a fashion show, and Richards herself walked the runway while being acknowledged as this year’s award recipient. Pictures from the event show Richards wearing a chic black dress, beaming with pride as the 550 people in attendance clap and cheer. At one point, she raises her arms triumphantly over her head.

“It was very emotional; I almost completely broke down on the runway. I was trying to hold it together,” said Richards on Friday morning, her voice slightly gravelly from a night of celebration and a newfound fondness for Irish whisky.

First introduced in 2011, the Virginia Green Award recognizes recipients’ contribution to the advancement of awareness, knowledge transfer, support and research in ovarian cancer.

Ovarian Cancer Canada CEO Elisabeth Baugh nominated Richards for her tireless work on the organization’s ongoing “#Ladyballs” marketing campaign. The campaign was developed by Grey Canada’s four-year-old cause marketing arm, Grey4Good – which also counts the Missing Children Society of Canada, Moms Demand Action for Gun Sense in America and the Salvation Army among its clients.

Richards, a former Cossette Media and Starcom MediaVest Group executive who has operated her own Toronto media consultancy Pollin8 since 2013, enlisted Canadian broadcasters, newspapers, magazines and online publishers to donate several million dollars worth of space and time for the campaign.

According to Ovarian Cancer Canada, the campaign was instrumental in a 118% increase in requests for By Your Side, a resource provided to women diagnosed with the disease. It also led to a spike in calls to offices across the country, with callers citing the campaign as their reason for reaching out.

One woman who heard a #Ladyballs radio commercial immediately pledged $100,000 to the organization, and the campaign has garnered approximately $60 million in earned media impressions since its January debut.

Karen Cinq Mars, vice-president of marketing at Ovarian Cancer Canada in Toronto, told Marketing this week she talked more about ovarian cancer in the seven days after the debut of the #Ladyballs campaign than she had in her previous seven years with the organization.

“We’ve seen the awareness mark move so dramatically by someone reaching out and challenging her colleagues in the media industry to get behind the cause,” she said.

The campaign itself represents a, well, ballsy departure from traditional efforts by hospitals and industry associations. They typically tug at heartstrings in an attempt to get consumers to loosen their purse strings; the #Ladyballs campaign aims a few inches lower.

The organization hired Grey as its agency in the summer of 2014, with what Grey Toronto VP managing director Darlene Remlinger said felt like an “impossible challenge” – raising awareness of a disease with single-digit awareness that is frequently overshadowed by other causes.

“You’re up against organizations that have become brands in and of themselves,” said Remlinger. “Movember is a brand now for prostate cancer, and Run for the Cure is a brand. Knowing we had such low awareness and little money, it was a daunting task.”

Approximately 2,800 women are diagnosed with ovarian cancer each year. Five women die from the disease every day. Currently, there are more than 17,000 women in Canada living with the disease.

Because there is no screening process, ovarian cancer is frequently misdiagnosed or not discovered until it has reached an advanced stage. That makes treatment difficult, which is a key contributor to its high mortality rate.

Since so many of the women diagnosed with ovarian cancer die quickly after diagnosis, the support network that typically forms around a cancer patient moves on quickly, creating what Remlinger called a “leaky bucket” of advocates for the disease.

Grey’s strategy, said Remlinger, was to move the conversation around the disease from clinical – much of the previous work around ovarian cancer, she said, had focused on “lady parts” – to conversational.

The #Ladyballs campaign’s most visible component is a video spot in which women show their so-called “ladyballs” by demonstrating chutzpah in the face of pressure or adversity. “Check out the ladyballs on her,” one woman says to her co-worker after a female employee disagrees with a male boss’s decision during a meeting. “Look at the ladyballs on her,” says a male announcer when another woman goes all-in during a televised poker tournament.

The payoff comes in the concluding voiceover, which informs viewers that women have “balls” – their ovaries – too, and they’re at risk, before directing them to donate at Ladyballs.org.

The concept of “women with balls” isn’t entirely new in popular culture, but the campaign marked a bold departure from other forms of cancer awareness/research advertising.

Even one of Grey4Good’s initial creative concepts focused on the idea of motherhood before ultimately being jettisoned for being too safe. “I didn’t love it and didn’t think it was going to break through – and that was part of our criteria,” said Cinq Mars.

Ovarian Cancer Canada had what it believed was a solid, breakthrough creative idea, but it still faced a huge hurdle, one common to many non-profits: A limited media budget. Which is where Richards enters the story.

She had first approached Ovarian Cancer Canada about helping the organization in September 2014, just as she was embarking on chemotherapy treatment for her own illness. “They said ‘Don’t you want to deal with this first?’ and I said ‘No, let’s get on with it,’” she said.

Richards had been seeking a way to give back for some time when the out-of-the-blue cancer diagnosis showed her a path forward.

She had been diagnosed with stage 2 ovarian cancer in the summer of 2014. There had been frequent trips to the bathroom, and she was unable to shake a persistent bloated feeling. Suspecting a urinary tract infection, she promptly booked an appointment with her doctor. It was a decision that saved her life.

A cyst was subsequently discovered and removed, but six rounds of chemotherapy would be required. Every three weeks, Richards would spend nine hours sitting with other cancer patients as a chemical cocktail designed to inhibit further cancer cell growth – while simultaneously killing normal cells – was pumped into her veins.

The intravenous treatment was decidedly unpleasant for a person with a strong dislike of needles, but being repeatedly poked and prodded was the least of it. Richards had felt only mild discomfort prior to her diagnosis; now she felt terrible.

Though she lost her hair, she never lost her will. She was finally pronounced cancer free in December 2014.

Cinq Mars wasn’t aware of Richards’ reputation as one of Canada’s most experienced media and marketing practitioners when she was first met the woman who would help turn #Ladyballs into a marketing phenomenon.

“When she knocked on our door I had no idea who Lauren was,” said Cinq Mars, who said the two subsequently became close friends (“We’re like kindred spirits,” she said) as Richards worked as a campaign strategist, providing critical guidance and insight.

“She’s a powerful advocate who has opened up doors and all kinds of conversations. She is absolutely, without a doubt, deserving of this recognition.”

Richards first created a presentation for potential media partners outlining the disease, including the creative to provide a sense of how it looked. “Before somebody puts it on their airwaves or in their newspaper, I think it’s only respectful that they know what it’s about,” she said. “I was very proud of what Grey had done, and thought it would help the cause.”

Ovarian Cancer Canada had wanted to launch the campaign in the fall to coincide with its annual Walk of Hope fundraiser, but Richards knew that was when advertiser demand for broadcast and print inventory was at its highest. “If they can sell their inventory out, they have to,” she said.

Instead, she recommended the organization launch the campaign early in the year, when most advertisers have retreated from their post-holiday campaigns, but media consumption remains high.

Richards herself even pitched in to help spread the word. After the campaign’s launch, she spent four hours in a booth at the CBC’s Toronto headquarters, conducting 16 back-to-back interviews about #Ladyballs with CBC Radio hosts across the country. “I was in there with my headphones on, bouncing around all over the country from one host to the next.”

Remlinger said Richards was vital in amplifying the campaign’s strong creative message. “The fact that the media is virtually 100% donated is a testament to the respect she has in this industry,” she said.

It is now some 18 months after her diagnosis, and Richards is in a good place. She continues to work on the #Ladyballs initiative (a radio component is now in market) while running the Pollin8 consultancy.

Even after a late night celebration, a conversation with Richards is still peppered with her trademark laugh, once described in Marketing as a “rollicking guffaw.” She seems happy and content. You could even say she’s having a ball.

Love the #Ladyballs movement. Lauren is for sure a powerful advocate and wonderful spokesperson.
Frank Palmer