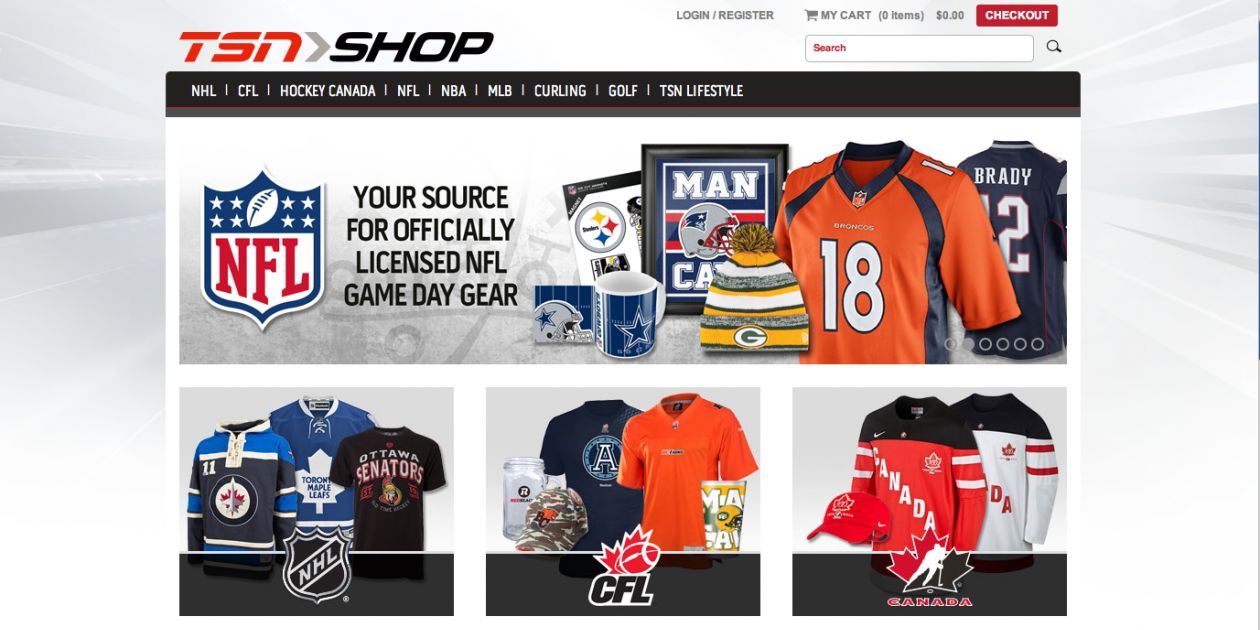 New venture isn’t intended to compete with established online merchants, but round out the online experience for TSN.ca users

Adding shopping to its roster of online capabilities, TSN has unveiled TSNShop.ca, a new online venture offering licensed merchandise from several leading sports leagues and associations including the NFL, CFL and Hockey Canada.

The Bell Media-owned site currently offers more than 5,000 products, including an “extensive” list of TSN branded products such as t-shirts and toques. There is also a “Build your own man cave” section, where visitors can shop for big-ticket items like a “Boston Bruins big daddy leather look poly urethane recliner” ($999.99) or a “Toronto Maple Leafs bar height directors chair” ($189.99).

Ian Charlton, managing director of TSN Events, said TSN first “dipped a toe in the water” in the online retail space in 2009, but described its latest venture as “much more ambitious,” with a “much fuller and more comprehensive” product offering.

“It was really a great learning experience to understand the extent to which we wanted to engage this platform and this business,” said Charlton of the previous incarnation. “It told us a lot about product mix, what fans wanted and what they didn’t.”

The new iteration of the shopping venture is built around a partnership with Mustang Drinkware, a London, Ont.- based company that manufactures licensed beverage holders including glasses, mugs and travel mugs, and can also assist with order fulfillment.

“They’ve really got scope and capacity in this field,” said Charlton.

He said the new venture is not intended to directly compete with established online merchants, but round out the online experience for TSN.ca users.

“I’m fond of the expression ‘Impact over volume,’” he said. “What we’re trying to do is make a statement to the marketplace that we think we have the leading digital platform in TSN.ca, and it’s our responsibility on an ongoing basis to make it better and make sure we’re offering more engagement – all of which are important to making a product even greater.”

The launch of TSNShop.ca is being supported by an online and broadcast campaign using the various Bell Media assets, including their social media components. The campaign will include standard TV broadcast units including billboards and bottom thirds.

Activity will increase in November, particularly around the Black Friday and Cyber Monday shopping occasions. “The next 45 days of the retail season will be absolutely critical, whether you’re an online or retail merchant, and we want to make sure visibility is the best it can be,” said Charlton.

“These are early days and we’re making no assumptions on volume,” said Charlton. “We’re just looking to add a new piece in terms of the comprehensiveness of TSN.ca”