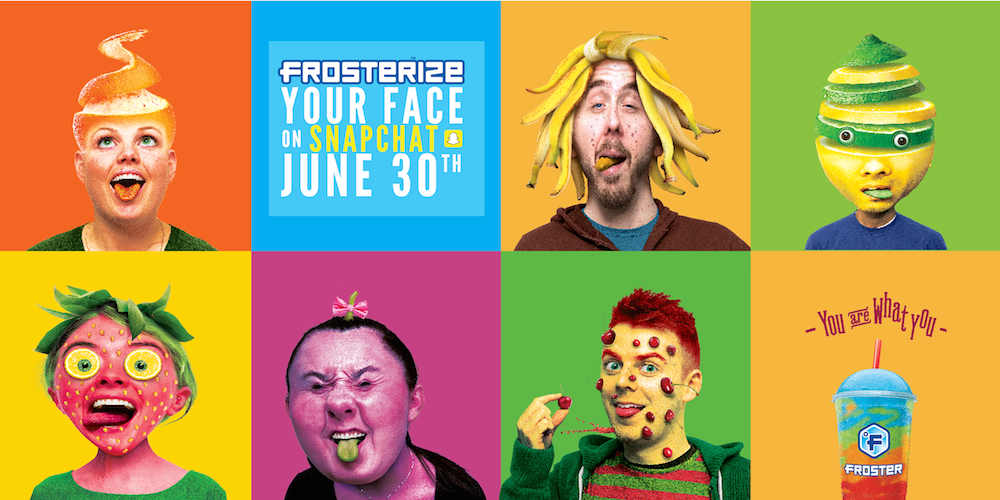 It’s happened to almost everyone: you sip a cold drink too quickly — or too much — and grimace over the freezing effect. Mac’s Convenience Stores will make that experience a lot more fun by offering a way for consumers to “Frosterize” your face using specially-created Snapchat filters. Developed by creative agency Giants & Gentlemen, the first of the Snapchat filters will be available on Thursday. Each filter will be based on characters associated with flavours of Circle K Froster drinks such as Orange Crush. They will allow Snapchat users to take a selfie but add elements that alter their face, such as a wildly moving banana peel and bright yellow eyes, complete with salsa music.

While Taco Bell and other brands have already experimented in this area, this represents the first time Mac’s Convenience stores have used Snapchat filters, according to Alanna Nathanson, Giants & Gentlemen’s co-founder and creative director.

“Our current target is very active on Snapchat daily, and since this is a relatively new platform for brands (especially in Canada), we wanted to be on the leading edge of utilizing this space,” she said via e-mail. “We do have other elements of the campaign on Facebook, Twitter, Instagram, Spotify, and AdWave, and print in stores and on buses in relevant neighborhoods, though they all are driving to our main event on Snapchat.”

The filters are supported by “You Are What You Froster,” a campaign that will include two radio spots, in-store ads, t-shirts for store clerks, interior bus posters and paid social posts.

“Since Snapchat is a new technology, there are challenges to navigating their parameters and understanding what is possible from a functionality standpoint,” Nathanson said, “but the Snapchat team has been very open to working with us to craft the filters.”

Besides monitoring how many people interact with and share the first filter, Nathanson said the agency will be reporting to Mac’s on social media mentions and hashtag shares including as #Froster, #Frosterized, and #Frosterize.

“We want to stay relevant with our target, and this is an excellent opportunity to speak to them through a vehicle they love and understand,” she said. “Shares and mentions are going to be critical in understanding our reach, which ultimately should translate into increased awareness and drive purchases.”

A second filter for the campaign will be released on the first of August.