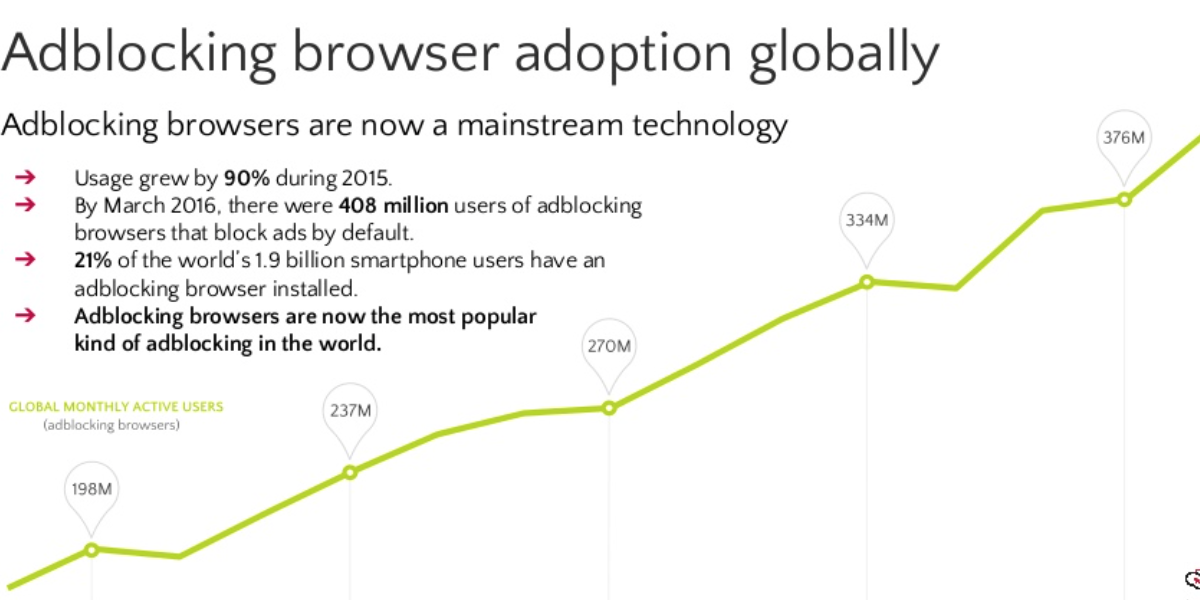 Apple, Spotify, CNN and others who use in-app advertising to support their mobile products are now at risk of ad blocking, according to a report from PageFair.

In “Adblocking Goes Mobile,” which was produced by PageFair in partnership with app intelligence firm Priori Data, not only suggest ad blocking on mobile devices has risen 90% since 2015, but that there are marked differences in how the problem is playing out globally.

Mobile browsers that support ad blocking, for example, is far more common in China, India and other emerging markets, and in Europe ad blocking browsers are used three times more often than here, with over 27 users per thousand smartphones. Content blocking apps, on the other hand, are three times more popular in North America than in Europe, with nearly nine users per thousand smartphones, the report said.

Those figures may change as more browsers begin integrating ad blocking features, such as Opera, or make it a defining part of the product, such as the Brave browser. BBC News recently reported that mobile network provider Three will block ads as part of a day-long trial next month.

“I think this is the start of something that will grow as more device manufacturers and web browsers follow suit,” Dr. Johnny Ryan, head of ecosystem at PageFair, told Marketing via email. “Mobile adblocking could become a feature that manufacturers feel compelled to include. If that happens then we will see the kind of figures that are evident in North America too.”

The PageFair report comes out shortly after a study by the IAB Canada which showed a decline in ad blocking. However that research looked at a poll of 30,000 PC users.

Today there are two categories of user on the internet, Ryan said: users of the normal web who see all ads, and users of the blocked web who currently see so ads and are of particular interest to premium advertisers. While this is causing short term pain to publishers it actually opens up a new and entirely uncluttered (and zero fraud) segment that brands can reach he said.

“From the media buyer’s view the normal, non-adblocker segment are a problem because they have an acute attention deficit, and could be ad fraud bots,” he said. “However, the media buyer can look upon the growing blocker segment as the reverse: There is no advertising clutter, because these users see no other ads. There is no ad fraud. And this segment can provide a premium top of funnel tool for brand building.”

The key to this is to display ads in a respectful and sustainable manner on the blocked web, Ryan added.

Overall, the report said 419 million people, or 22% of the world’s 1.9 billion smartphone users, are blocking ads on the mobile web. It also suggested that mobile users are not merely interested in disabling display ads but “suggested content” in apps such as Facebook and Instagram.