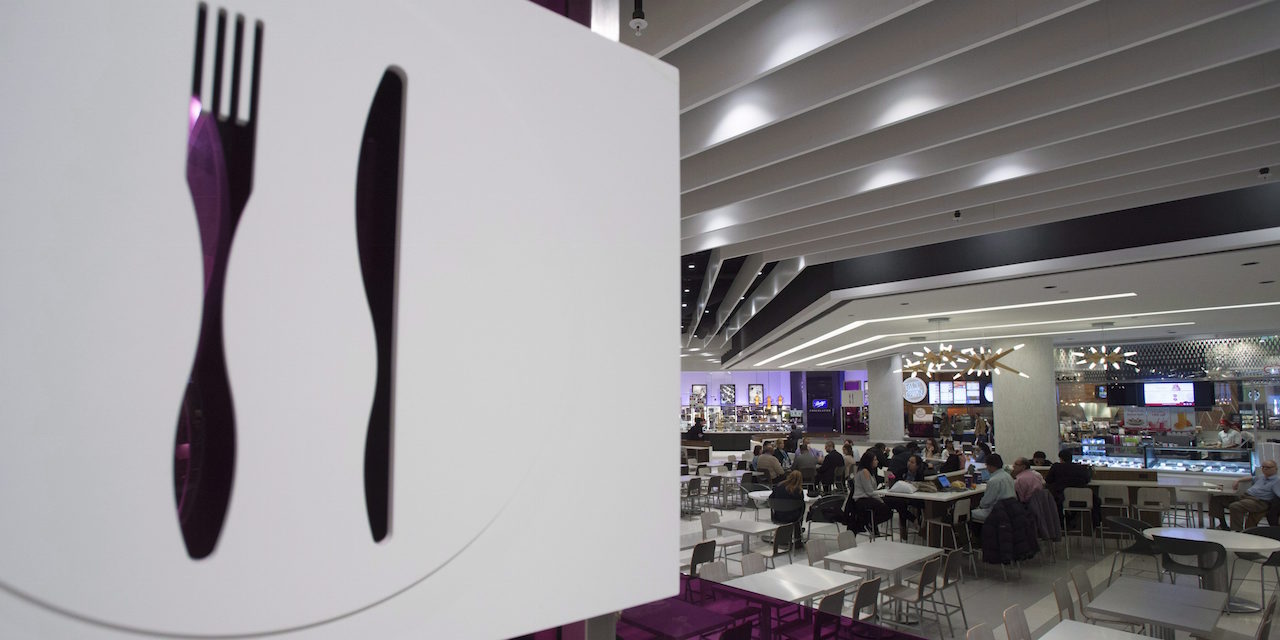 Food courts were once enclaves of ketchup-stained tables where menus featured greasy fast-food offerings, and little else. But shopping malls are upping their culinary game, increasingly making it a focal point as they compete for consumer time and money.

Shopping centres in Canada have gradually devoted more real estate to food services in recent years. Experts say that is reflective of efforts to lure customers inside and keep them longer, particularly those who shop online.

Stephanie Cegielski, a spokeswoman for the International Council of Shopping Centres (ICSC), said shopping mall owners are leasing out space to businesses that are “a little bit more recession proof,” such as restaurants, movie theatres and fitness centres.

“The mall ownership is really trying to diversify its tenants,” said Cegielski.

The amount of space shopping malls have dedicated to food courts, restaurants and all other food services has grown from 7% in 2007 to 8.47% last year, according to data from the ICSC.

“The retail environment generally across the country is highly competitive,” said Sal Iancono, the executive vice-president of operations for Cadillac Fairview, which owns 20 malls in Canada. “There’s a lot of shopping centres that vie for the same consumer dollar.”

In response, Cadillac Fairview started revamping food courts at its properties five years ago. The company most recently unveiled a $360-million redevelopment at the Rideau Centre in Ottawa. Part of it is a new 35,000-square-foot dining hall that is about triple the size of the former food court.

The figures from the ICSC showing expansion in food service space do not account for restaurants or food halls located inside so-called anchor tenants, usually department stores.

Each of Nordstrom’s five Canadian locations operates at least two places to order a drink or a bite. Its Calgary store in the Chinook Centre, for example, operates a full-service restaurant and cafe.

Saks Fifth Avenue partnered with Oliver & Bonacini to open a restaurant at its two stores in the Greater Toronto Area. It also incorporated a Pusateri’s food hall, which boasts multiple prepared-food stations, artisanal products and produce, at its Sherway Gardens location. The Eaton Centre’s Saks food hall is set to open next Thursday.

Consumers are starting to demand those kinds of food offerings, said Farla Efros, president of HRC Retail advisory, adding that they want healthier fare than the standard burgers and fries.

“It is no longer about the McDonald’s and cheap food courts,” she said.

Food courts and restaurants also offer visitors an experience they can’t get online at a time when retailers must contend with the rise of online shopping, said Iancono. EMarketer, a research firm, projects retail ecommerce sales in Canada will grow by 14.9% this year and account for 6.5% of total retail sales.

With a better food selection and dining ambience, mall owners aim to encourage customers to stay longer. Their hope, in turn, is that those prolonged visits result in increased sales.

“The more time that they’re in there, the more likelihood that they’ll spend money,” said Efros, adding that consumers appear to be more willing to part with their discretionary spending dollars on food than clothing.

The strategy may be paying off.

In August, shoppers spent $1,057 per square foot of food service in Canadian malls, according to the ICSC — up 2.9% year-over-year. Food service accounted for 11.7% of Canadian mall sales last year, growing from 10.2% in 2005, according to Avison Young, a real estate services firm in Toronto.

“What most mall owners are finding is that people come and stay longer and spend more money when they have a variety of things to do,” said Cegielski.

The author of her own professional fate, she's taken a publishing giant to new social media heights

The founder of a vancouver shop growing to international stature with amazing hands-on branded experiences
Load More
Sign in
NOTE: You must be a magazine subscriber to gain access to the digital issues and archives.